Today on the blog we welcome author Lauren James, with her Writing Tips ‘Tips on Writing about Climate Change‘, as part of the blog tour for her new book Green Rising which was released on 2nd September 2021. This post contains affiliate links.

Lauren James is the twice Carnegie-nominated British author of many Young Adult novels, including The Reckless Afterlife of Harriet Stoker, The Loneliest Girl in the Universe and The Quiet at the End of the World. She is also a Creative Writing lecturer, freelance editor, screenwriter, and the founder of the Climate Fiction Writers League. Her new release is Green Rising, a climate change thriller.

Her books have sold over a hundred thousand copies worldwide, been translated into six languages and shortlisted for the YA Book Prize and STEAM Children’s Book Award. Her other novels include The Next Together series, the dyslexia-friendly novella series The Watchmaker and the Duke and serialised online novel An Unauthorised Fan Treatise.

She was born in 1992, and has a Masters degree from the University of Nottingham, UK, where she studied Chemistry and Physics. Lauren is a passionate advocate of STEM further education, and many of her books feature female scientists in prominent roles. She sold the rights to her first novel when she was 21, whilst she was still at university.

Lauren lives in the West Midlands and is an Arts Council grant recipient. She has written articles for numerous publications, including the Guardian, Buzzfeed, Den of Geek, The Toast, and the Children’s Writers and Artist’s Yearbook 2022. She has taught creative writing for Coventry University, WriteMentor, and Writing West Midlands.

Tips on Writing about Climate Change

In Green Rising, the characters are teenagers who can grow plants from their skin. They use their powers to rewild the planet, and stand up to the profit-hungry corporations who want climate change to continue (because the end of the world is going to be very profitable to a lot of people). It shows the positive changes we can make to the environment which will help store carbon in huge quantities, often through plants: kelp forests, peatlands, reforestation.

I expected the writing process to be depressing and mentally exhausting. But, in fact, immersing myself in the climate debate helped me to stop feeling anxious and helpless about our future. I could see all the things that needed to be done to fix the future.

My research involved a lot of books (my favourites: The Future We Choose: Surviving the Climate Crisis by Christiana Figueres & Tom Rivett-Carnac, Drawdown: The Most Comprehensive Plan Ever Proposed to Reverse Global Warming by Paul Hawken and This Changes Everything: Capitalism vs. The Climate by Naomi Klein).

I’m not great at reading scientific publications – it feels too much like homework. But I am good at wasting time on social media. So I tricked myself into researching climate change through online resources like the Heated newsletter, Lights On newsletter, Inkcap Journal, and Green Light by The Guardian newsletter, as well as the How to Save a Planet podcast, Drilled podcast and Hot Take podcast.

Once I’d taught myself as much about the topic as possible – from the science, to the politics, to the economics – I look for the ways I can tie science into interesting ideas from other fields, like archaeology or linguistics. If you can discuss a big, often boring topic like atmospheric chemistry through the lens of something fun, it can be an exciting way to bring the reader on board.

In my books, characters explore caves full of treasure after an apocalypse, discovering cold-storage seed caches in a Doomsday Vault. They might have to deal with an outbreak of the Black Plague, after the melting permafrost thaws animal corpses which bring bacteria back to life.

I keep an eye out for interesting, well-known concepts – for example, the reintroduction of wolves to Yellowstone National Park is a science experiment which everyone knows well. It’s emotional, uplifting, and hits you right in the heart. A common idea like that is a great way to talk about something more complicated, such as how large predators can impact climate change through balancing the ecosystem.

I look for debunked or disproven theories in science, which can lead to really creative thinking. In Jurassic Park, the dinosaurs are huge, terrifying reptiles, but we now think that dinosaurs were more likely to have feathers. But a movie about a giant, fluffy blackbird-like T-Rex wouldn’t make for a very good film.

In the fifties, fossil fuel companies investigated other uses for their products, such as burning oil to blow away smog; coating land in asphalt to change rainfall patterns and avoid drought; and spraying oil droplets onto the ocean surface to divert the paths of tropical storms. These ideas seem ridiculous now, but they tell us a lot about people’s knowledge level – and motivations – at the time.

I try to think about big concepts in terms of historical events: how can we look at archaeology to get a new perspective on climate change. How might the present day look from a far-future or far-past point of view? Has something like this ever happened before on Earth?

Ultimately, climate change is a political topic – it has to be. It’s unavoidable. The end of world is profitable. My characters are angry they’re being told to reduce their climate footprint, that they’re being made to feel guilty about their personal pollution when industry is responsible for the vast majority of emissions.

I wanted to create a book for young people who are anti-capitalist and pro-revolution, who are changing the world at an incredible pace against the enormous weight of the existing establishment.

From a legal perspective, there were things I couldn’t do – I wasn’t allowed to mention real life companies or people by name, and had to create fictional versions of certain things. But in Green Rising, I tried to capture the feeling of being part of the ongoing green revolution, to show what it feels like to grow up in a time of unprecedented existential fear. I wanted to write about young people turning that fear into hope and action.

My top tips for writers who want to include climate change in their work:

Remember that hope and optimism will inspire more action than anything else. Fiction can inspire a huge amount of empathy, and that’s a force that we can use collectively to inspire change on a global level.

Set in a near-future world on the brink of ecological catastrophe, Lauren James’s novel is a gripping, witty and romantic call to arms.

Gabrielle is a climate-change activist who shoots to fame when she becomes the first teenager to display a supernatural ability to grow plants from her skin. Hester is the millionaire daughter of an oil tycoon and the face of the family business. Theo comes from a long line of fishermen, but his parents are struggling to make ends meet.

On the face of it, the three have very little in common. Yet when Hester and Theo join Gabrielle and legions of other teenagers around the world in developing the strange new “Greenfingers” power, it becomes clear that to use their ability for good, they’ll need to learn to work together. But in a time of widespread corruption and greed, there are plenty of profit-hungry organizations who want to use the Greenfingers for their own ends. And not everyone would like to see the Earth saved…

As they navigate first love and family expectations, can the three teenagers pull off the ultimate heist and bring about a green rising? 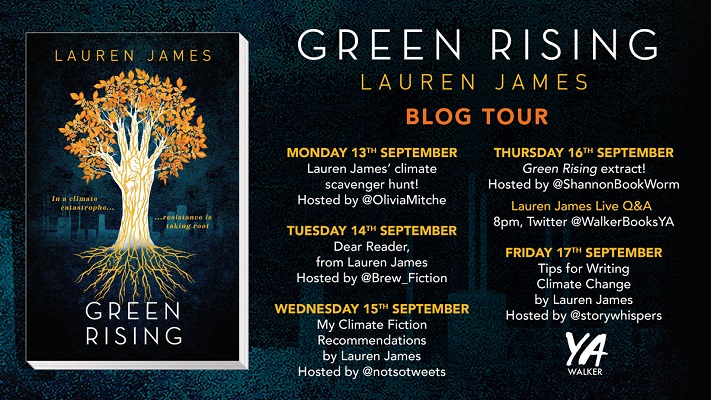