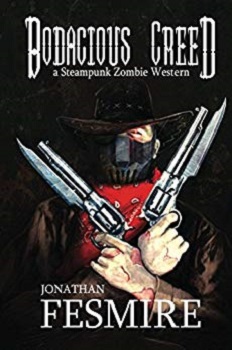 U.S. Marshal James Creed has known loss, starting from the untimely death of his wife and daughter in a sudden fire. His work, chasing down and arresting outlaws across the Wild West, is all he has left to live for. Then one day, in 1876, the infamous killer Corwin Blake catches Creed by surprise and guns him down.

Creed awakes after a mysterious young woman resurrects him in a basement laboratory beneath a brothel. Half alive, Creed feels torn between his need for justice and his desire to fall back into the peace of death. Creed’s instincts drive him to protect the city of Santa Cruz, California, from the outlaws it harbors while searching for Blake.

He uncovers a secret criminal organization, likely protecting Blake, determined to use resurrection technology for its own ends. The former marshal, now faster, stronger, and a more deadly shot than ever before, must work with a brothel madam, a bounty hunter, and the remaining marshals to uncover the criminal syndicate before they can misuse the machines of rebirth and create more mindless zombies. Meanwhile, he must also stop Blake, before the outlaw kills the only people he cares about.

His own death can wait.

I am aware that the genre of Western Steampunk has a lot of followers and for them Bodacious Creed may well provide an interesting and gripping read. It is not Jonathan Fesmire’s fault that I am not a fan of the genre but despite what I am sure were his best endeavours I have not been converted.

The tale is set in a town called Santa Cruz in 1876 where we have all the settings for a good Western including cattle ranches, mines and a rough, bustling port.  We also have all the right characters including cowhands, dock workers, marshals, villains and the ladies from the bordello, led by the stereotypical “tart-with-a-heart”. Within this setting Fesmire presents us with technology that is not only advanced for that period, but frequently well ahead of anything we have today. Somehow all powered by steam engines and all built in blacksmith’s forges.

And that was before the Zombies were introduced!

The basic storyline was simple enough to follow although it all seemed rather drawn out. Was it really only 372 pages long?  The action scenes were unimaginative and at no stage was I taken by surprise. The cast of characters was very large and on the whole made up of typical Western goodies and baddies, most of whom were fairly one dimensional. The lead character of Anna was more interesting than most.

Perhaps there was parody and irony that I failed to recognise.  From my knowledge of Steampunk I understand that the genre has a number of repeating features including hidden pockets and lock picks.  Bodacious Creed has both in large numbers.

There are some lessons to be learned from the book, principally the warnings of meddling with nature but haven’t we heard these before?

I know that Bodacious Creed will appeal to many but personally I found little merit in it. I looked for positives but in all honesty I can only award two and a half stars.

Author Jonathan Fesmire, originally from Santa Cruz, California, now lives in Southern California with his son. By day, he’s a copywriter, by evening a steampunk author, and at all times, a dedicated dad.

Though Jonathan started out writing fantasy, he has moved completely to steampunk, enchanted with its aesthetics, possibilities, and implications. He’s a fan of the stories, the art, and the gadgets, and enjoys interacting with the community.