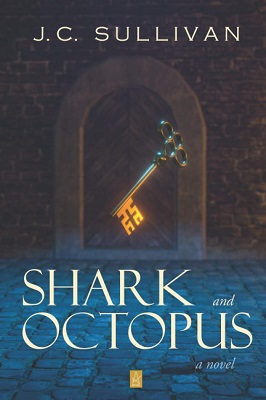 Shark and Octopus is a comic caper telling the story of Griffin Gilmore, whose unique profession is retrieving items of value without anyone realizing they were ever missing. Griffin’s been hired to steal a key in a museum exhibit and replace it with a lookalike key. As he grabs the key Griffin fears he has set off the museum alarm, but all he hears is that sweet, sweet sound of silence. A man dressed entirely in white arrives and takes the key. Griffin can’t let this go. He learns the key is to the dungeon of an Italian castle, but the dungeon is empty. Who is this man and why does he want that key?

Helping Griffin are Kit Covington, his best friend since kindergarten and a top ten lister of everything; Bobby Lowell, aspiring actor with the skill for uncovering information through his roles; and Annie Knaack, Griffin’s girlfriend, calm where he is impatient, sweet when he is sarcastic. Griffin is brilliant but undisciplined; restraint is not in his skill set. He’s persistent and above all loyal to his friends.

Griffin discovers that a former member of the Nazi’s Special Task Force for Music covered one wall in a house in Baltimore with a musical score. The notes are a clue, Griffin realizes, to what the man in white is after. A trap is set, with Griffin as the bait.

Griffin Gilmore is a man for hire. People hire him to acquire what they want. He has been paid to swap a key at a museum. The key he is swapping is not the real key but a replica.

Everything has been meticulously planned and Griffin isn’t expecting anything too hard, though he wasn’t expecting the man in white to turn up, pointing a gun at his head and demanding the real key.

Griffin is annoyed that the man in white has his item and he wants it back. He also wants to know what he wants with the key and what it opens. The answer is within Florence and the Arazzo Castle, but what is the man looking for as the room the key opens is empty.

Griffin and his team, girlfriend Annie, and friends Kit and Bobby are on the case, as is the FBI who are helping them, but where will the trail take them and can they get the key back or stop the man in white on whatever mission he is on?

Shark and Octopus, the title is taken from a schoolyard game the characters used to play, is a humorous mystery novel following Griffin Gilmore, a man who is paid to steal. The characters were all different though I can’t say that I got to know any of them that well, Griffin a bit more than the others, but the man in white was just that for most of the novel, this elusive character who we only know by name.

The plot was different and took you on an adventure. Unfortunately, for me, the book was too long and there were sections that I felt added nothing to the book and I started glazing over them and missing bits out that I didn’t see as relevant. There was also a lot of chatter between Griffin and his team which seemed more for comedic effect as this is where the humour mainly came from, the banter.

It was a shame as the book opens strongly with a bait scene in which Griffin with the help of the FBI is hoping to catch the man in white. The book then moved back in time a few months to where it all began and the key at the museum. Overall, the book was interesting but I plodded my way through it rather than it being an effortless read.

J CHARLES SULLIVAN is John Charles Sullivan, an American writer. John was born in Baltimore, Maryland September 4, 1954. Shark And Octopus, his comic mystery novel, appeared on the Radish app from August 2017 to February 2018. The novel is the second in a planned series featuring Griffin Gilmore; along with his girlfriend Annie Knaack; Griffin’s best friend Kit Carson; and their actor friend Bobby Lowell.

His short stories have appeared in a number of literary journals, including The Avalon Literary Review, Sobotka Literary Magazine, Pinyon, The Alembic and The Pikeville Review. John has also published non-fiction, including op-eds for the Wall Street Journal, Chicago Tribune, Philadelphia Inquirer, and the Christian Science Monitor. In connection with his work as a lawyer John testified before the House Subcommittee on the Constitution in July 1998, an appearance broadcast on C Span.

John has two daughters, Kira and Meredith. He lives in Baltimore.