The Timepiece and the Girl Who Went Astray by O.R. Simmonds – Book Review 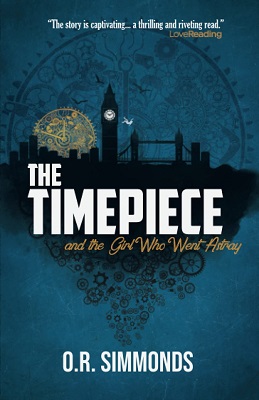 The Timepiece
and the Girl Who Went Astray

1980s LONDON. A SENSELESS MURDER, A BIZARRE DISAPPEARANCE AND A MYSTERY DECADES IN THE MAKING.

William Wells, a gifted but risk-averse US college dropout living an unadventurous life in London, stumbles upon a mysterious timepiece with the ability to alter time. When the Timepiece’s previous owner is brutally murdered by unknown assailants, Will flees, only to see his girlfriend, Abigayle, vanish before his eyes when she comes into contact with this remarkable watch.

He now finds himself alone in an unfamiliar city, wanted for a murder he didn’t commit and the prime suspect in a woman’s disappearance. Whether he knows it or not, Will does have one advantage – control over the most powerful force in the universe: time. The only problem is that he has no idea how to wield it. Those that do, members of a secretive and long-forgotten organisation, are also on his trail and there are no lines they won’t cross to recover The Timepiece.

Seeking the perfect anniversary gift for his fiancée, Abigayle, Will Wells finds himself in an old, cluttered second-hand shop in Spitalfields. The ancient proprietor insists on selling him an elaborate watch unlike any he’s ever seen. As he’s leaving, two men push past him into the shop and shoot the old man dead. Petrified, Will beats feet back to Abigayle’s flat.

At Abigayle’s, things get even worse when she examines the watch and suddenly disappears. Desperate to find her, Will returns to the shop to look for clues. He gradually realizes that what he has isn’t a watch at all but the “Timepiece,” a sort of time machine. Before he can start searching for his missing fiancée, though, police arrest him for the shopkeeper’s murder.

Now Will is in deep. The police think he killed the shopkeeper and did away with Abigayle. Then there’s a mysterious organization called the Bureau of Time Dissemination, which sends the “Timekeepers” after Will to recover the Timepiece. And if that weren’t enough, Will is a Yank from Iowa in England illegally, having overstayed his visa.

Will teams with an unlikely partner to escape from jail and search for the missing Abigayle. What follows is a chase through London and, briefly, Ireland with the police and the Timekeepers close on Will’s heels. If the police catch him, they’ll arrest and possibly deport him. If the Timekeepers get hold of the Timepiece, he’ll have no way of reaching Abigayle, who’s trapped in the future. Even though the Timepiece is a powerful tool, can he figure out how to use it to stay ahead of his pursuers long enough to find and rescue his damsel in distress?

The Timepiece and the Girl Who Went Astray is a fast-paced story with as many twists and turns as a mountain road. There is plenty of action and many surprises. Will isn’t an entirely sympathetic character at the beginning, but he matures as the story progresses and emerges as a decisive and principled young man.

Time travel can be a difficult subject to tackle, but it’s well done in this book. If you accept the premise (it’s a fantasy, after all), there aren’t any head-scratching moments where events don’t make sense. I thoroughly enjoyed the book from start to finish and enthusiastically recommend it.

Oliver R. Simmonds is a Writer, Director and Artist working in the Games Industry and author of The Timepiece and the Girl Who Went Astray.

Before working in the games industry, he spent nearly a decade dreaming up deep, detailed worlds with weaving narratives only for them to be ‘value engineered’ by clients. It was during this time that he decided he no longer wanted to be a frustrated writer and to try to be an actual writer instead.

He ran a successful Kickstarter campaign to help fund the publication of his first novel, The Timepiece and the Girl Who Went Astray. His second book is currently being edited and slated for release sometime in 2022.

Oliver lives in surrey with his wife and two young boys. His eldest son is named after Doc Emmett Brown and the youngest’s middle name is Adventure (yes, really). It’s not all that surprising that his debut is a time travel adventure then.

What did you think of ‘The Timepiece and the Girl Who Went Astray’? Share your thoughts in the comment section below!