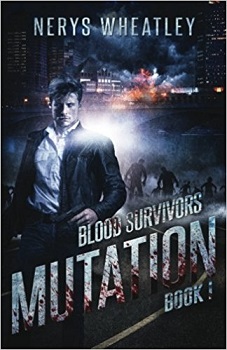 When a violent mob invades cop Alex MacCallum’s part of town, it’s just a typical night for him and the others living there. They expect to be feared and despised – they’re survivors of the virus that turns its victims into mindless flesh-eaters.

But the next day, when a new strain of the virus begins turning the population into eaters faster than ever before, Alex has to join forces with Micah, the leader of the mob, just to stay alive.

Can the two enemies survive the hordes of eaters, as well as each other, long enough to find a way to stop this new outbreak?

Around 4-5 days after being infected, the victims temperatures’ rise, toxins affect their brains, the iris’s of their eyes turn almost white, oh and they start eating human flesh!

Over time an antidote was discovered, but unfortunately it only worked in 25% of affected cases. It cured all of the symptoms, barring one; the victims’ white eyes. This is how those that were once Eaters became to be know as ‘White Eyes’, a derogatory term.

After reports of an Eater out on the street, in the middle of the day, something normally unheard of, Detective Constable Alex attends the scene, but something is niggling inside of him.
Something isn’t right. It isn’t long before his thoughts turn into reality. The victims are no longer taking 4-5 days to turn into Eaters, they are taking only minutes or hours.

Alex needs to discover what and how the strain of the disease is working so fast before he has a massive problem on his hands. He also has to accept help from a man who only yesterday was trying to kill him, Micah Clarke.

Mutation is an interesting take on the Zombie world, which due to a certain American TV show is quite a popular genre right now. I liked the idea of people being able to be cured from their zombie-like status.

The book is exceptionally well-written. It has a natural flow and tone to it, and Ms. Wheatley writes with such passion that you can’t help but be swept along with the plot.

The characters are wonderfully created. Both Alex and Micah have interesting roles, and are equally likeable (well maybe not Micah at the very beginning). The two worked well together, and their personalities came across strong. There was great camaraderie and lots of banter between them that will make you laugh.

The story moves at a fast, exciting pace and I became engrossed quite early on. I truly was enthralled by the whole Eaters, White Eyes, Normals (those that had never been an Eater), which actually did surprise me as I’m not a zombie fan.

If you like zombie films/books, or you just like a good thriller then Mutation will definitely perk your interest.

As far as I know, I’m the only Nerys Wheatley in the world. Which makes me really easy to find, digitally speaking.

I was born and grew up in the county of Essex in the UK and moved to Derbyshire almost two years ago, which was something of a shock, accent wise. Although I’m now getting used to being called “duck”.

I write horror/science fiction/action/thrillers (okay, I don’t really know what genre I write) with strong characters, humour, and fast moving plots. And I always try to be original. Like my name.