The Spider and the Stone by Glen Craney – Book Review

The Spider and the Stone by Glen Craney 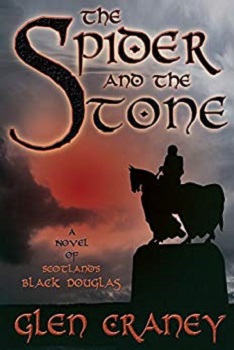 The Spider and the Stone

Isabelle MacDuff prays to escape a fate worse than death.

As the 14th century dawns, their fellow Scots scrap over the empty throne. Seizing the opportunity to enlarge his kingdom, the brutal Edward Longshanks of England invades his weakened neighbor to the north.

Yet one young warrior–who will become feared by his enemies as the Black Douglas–stands in the path of three Plantagenet monarchs.

Their clans are sworn rivals, but James pursues the ravishing Isabelle, whose forefathers for centuries have inaugurated kings on the hallowed Stone of Destiny. Their world is upturned when James befriends Robert Bruce, a bitter foe of the MacDuffs. Both James and Isabelle must make agonizing decisions that will draw the armies to the bloody field of Bannockburn.

Here is the story of the remarkable events following the execution of William Wallace of Braveheart fame. Set during the Bruce wars of independence, The Spider and the Stone is the unforgettable saga of the star-crossed love, religious intrigue, fierce friendship in arms, and heroic sacrifice that preserved Scotland’s freedom during its time of greatest peril.

‘The Spider and the Stone’ is an historical novel by Californian-based writer, Glen Craney.  We see events unfold in the third person, mainly from the viewpoints of James Douglas and Belle MacDuff.

The author manages to convey a strong sense of rivalry and intrigue between the waring Scottish clans, vying for the crown and it’s against this backdrop that James and Belle meet. However, there is no denying that the Scots have a common enemy in the form of Edward Plantagenet, King of England and a fragmented, strained and unhappy temporary alliance is formed behind William Wallace, to try to rebuff English incursions into Scottish territory.

The star-crossed lovers are driven apart by circumstances beyond their control, with James travelling to France and Belle being trapped in a loveless marriage. Events then play out within the historical framework with fiction mixed with fact, as we witness treachery and deception, love and loss, heartache and despair. In fact, if you’re looking for a light-hearted read, this most certainly isn’t it.

Inevitably, when telling a tale based on true life events, there are many names to grapple with, so I was grateful for the ‘Roll of Honour’ at the beginning of the book.  There were some hugely colourful players in this drama for the author to explore and whist the descriptive passages were very atmospheric, I would have liked more depth to some of the characters. However, to do that, a swingeing edit of arguably expendable material would have been necessary.

I was intrigued by the synopsis as my knowledge of thirteenth and fourteenth century Scottish history is poor. As the story is told from this angle, maybe the author can be forgiven for portraying the early Plantagenet regime as the more barbaric of the two, rather than trying to deliver a balanced view. However, if the intention was to have readers delving into their search engines for additional information about the time, then it certainly worked in my case.

Rich in misdirection, symbolism and pathos, the author gives us a lot of action-packed scenes, with dialogue which is liberally sprinkled with irony, cynicism, suspicion and mistrust. I presume the Scots would have used a form of Gaelic language and by and large, the author has attempted British-English with the occasional American-English phrase or word which will not perturb an international audience.

By way of contrast to the battle scenes, we see a strong partnership build between James Douglas and Robert Bruce. I was also particularly touched by the spasmodic yet burgeoning respectful relationship between Belle and Isabella, the wife of Edward II.  War and brutality walk hand-in-hand at this time, with Belle’s treatment at the hands of her captors being indicative of a blatant disregard for life. In Isabella, we see a glimpse of humanity, as she tries desperately to help a kindred spirit.

If you enjoy the historical genre, then you will doubtless find The Spider and the Stone worthwhile.  Underpinning the action is a series of romantic encounters for James and some readers might find this a bit tedious.  The book has 432 pages but it seemed a lot longer.  I enjoyed the story in some places but found it hard work in others.  For the amount of research and effort that clearly went into producing this novel, I award the author four stars.

A native Hoosier, GLEN CRANEY is a novelist, screenwriter, journalist, and lawyer. He caught the history bug as a boy while tracing the steps of his ancestors on Civil War battlefields and the reconstructed forts of the first Kentucky pioneers.

His travels around the world have found him playing baseball in Cuba, walking the biblical sites of Israel, exploring the Secret Vatican Archives in Rome, and climbing Templar castles in Scotland and France.

His books have taken readers to Occitania during the Albigensian Crusade, to the Scotland of Robert the Bruce, to Portugal during the Age of Discovery, to the trenches of France during World War I, and to the American Hoovervilles of the Great Depression.