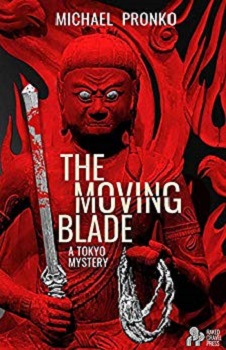 When the top American diplomat in Tokyo, Bernard Mattson, is killed, he leaves more than a lifetime of successful Japan-American negotiations. He leaves a missing manuscript, boxes of research, a lost keynote speech and a tangled web of relations.

When his alluring daughter, Jamie, returns from America wanting answers, finding only threats, Detective Hiroshi Shimizu is dragged from the safe confines of his office into the street-level realities of Pacific Rim politics.

With help from ex-sumo wrestler Sakaguchi, Hiroshi searches for the killer from Tokyo’s back alley bars to government offices, through anti-nuke protests to the gates of an American naval base. When two more bodies turn up, Hiroshi must choose between desire and duty, violence or procedure, before the killer silences his next victim.

The Moving Blade begins with a murder in Tokyo, the victim is an American. Bernard Mattson was a well-known diplomat in the Japanese metropole and known for his knowledge in art and Japanese History. The murder happened only a few days before Mattson was due to make an important speech. His speech and the manuscript of a book he was about to publish have mysteriously vanished.

Police officer Hiroshi and his colleague, an ex-sumo wrestler named Sakaguchi, were assigned to the case and started searching for the killer and the missing documents. Mattson’s daughter Jamie returns from America for the funeral. After the house has been searched by robbers during the funeral and people telling her about her father’s missing manuscript and speech, Jamie is determined to find both to save his legacy.

Their investigation leads them from hidden bars in dirty back alleys to government offices. Who killed Bernard Mattson and why? What secrets was he about to publish with his book?

I have never read a book where the plot took place in Japan. So that was a first for me. Luckily, it was an exciting journey. The author knows how to build up tension. He is very good with words, which makes the book a fascinating read. I like how the story unfolds itself with every new chapter. Same with the characters, who are likeable and give you a realistic impression of Japanese culture and its mannerisms.

Detective Hiroshi comes across as a well-educated and friendly person without missing the odd characteristics that make us human.

This book is the second book in a series about Detective Hiroshi but you can read it as a stand-alone. Chances are good that you want to read more about Hiroshi and dive deep into the series which is hopefully growing with another book in the future. If you are into well-plotted and enthralling crime stories, you are going to enjoy this one.

Michael Pronko has lived in Tokyo for twenty years, but was born in Kansas City, a very different world. After graduating from Brown University in philosophy, he hit the road, traveling around the world for two years working odd jobs. He went back to school for a Master’s in Education, and then took a teaching position in Beijing. For two years, he taught English, traveled China and wrote.

After more traveling and two more degrees, another M.A. in Comparative Literature in Madison, Wisconsin and a PhD in English at the University of Kent at Canterbury, he finally settled in Tokyo as a professor of American Literature at Meiji Gakuin University.

He has published books in Japanese and two textbooks in both English and Japanese. Over the years in Tokyo, he has written regular columns for many publications: The Japan Times, Newsweek Japan, Jazznin, ST Shukan, Jazz Colo[u]rs, and Artscape Japan.