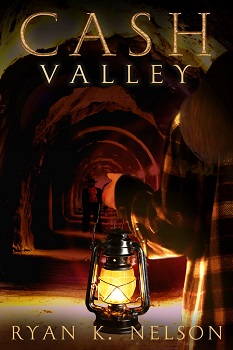 When FBI Agent Alex Travis receives an anonymous phone call on a September morning in 1954 with a tip concerning the now cold case of the Cache County Bank robbery, it has his undivided attention. The tip leads Travis to the top of the secluded Green canyon in Logan, Utah, where a young man named Jack Pepper proceeds to tell a story spanning the two years from the time of the robbery, when he and his girlfriend, Kate Austin, stumbled upon the crime of the century for the Cache Valley.

Travis must decide if he is dealing with the suspects or the victims of one of the largest bank robberies in U.S. history.

With Jack and Kate’s lives hanging in the balance, it will take one more trip up the canyon, to the entrance of the Spring Hollow mine, where the daylight ends and the cold dark begins.

The story is set in the year 1954. FBI Agent Alex Travis receives an anonymous phone call with a tip concerning his old case of the Cache County Bank robbery. Agent Travis has to go to Green canyon in Logan, Utah, to meet a young man named Jack Pepper. Jack and his girlfriend Kate have been held hostage by the bank robbers and tells Agent Travis what has happened in the two years since the Cache County Bank robbery.

Agent Travis is torn between believing Jack and his story and the possibility of Jack being a suspect himself in one of the largest bank robberies in U.S. history.

First things first: Ryan K. Nelson is a very talented author. Right from the beginning I was hooked. The story is very gripping and you never know what is coming next. I really appreciated the humour of the protagonists in the book as I loved their nature. Jack Pepper is the one who is outstanding the most: son of a Mexican Mother, and an American father, he always had to fight for his place in his hometown, Logan. His girlfriend Kate is a well-educated daughter of the local judge, but she only is her real self out in the nature, riding in the Canyons in the company of her beloved Jack.

For all of those who are into gripping, well-written, and thought-through crime novels, I would like to recommend this book. More so, I would recommend it to fans of the Fifties too. I had difficulties to put my Kindle aside and in the end had to give in and finish it in one go. I am sure Ryan K. Nelson is on his best way to expand his fan base. I’m definitely in.

Ryan K. Nelson, originally from the San Francisco Bay Area, now lives in Salt Lake City, Utah. A graduate of Brigham Young University-Idaho, he works full-time in the banking industry, which lead to the inspiration for his debut novel, Cash Valley.

He recently discovered his love of writing, proving that even boring Bankers have an artistic side. He spends time outdoors, golfing, attending the symphony with his wife and loves going to the movies. When he does have a free minute, you will usually find him in the den working on whatever he can come up with next.