The Revolutions of Caitlin Kelman by Matthew Luddon – Book Review

The Revolutions of Caitlin Kelman by Matthew Luddon – Book Review 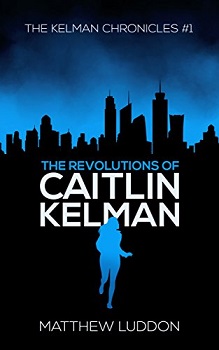 Can sixteen-year-old Caitlin Kelman bring down an Empire?

Caitlin is sixteen when her parents are captured by the Empire. Fleeing to Dominion City, Caitlin looks for answers, fighting soldiers, kidnappers, and stalkers along the way.

An illegal immigrant with forged papers, Caitlin falls in with a mysterious group called the Stateless, who are fighting to bring down the Empire, once and for all.

One day, she runs into Alec, a boy from her hometown, who wants to help her return to her old life. Her normal life.

Will she settle for a life with Alec? Or will she join the revolution, and learn the truth about her parents, even if it means she has to sacrifice herself — and the lives of others?

Caitlin Kelman narrowly escapes an incident in her small town (Riverton), and flees to the big city with the hope of finding her uncle.

Being all alone in a big city she encounters different challenges. She tries to avoid all attention and flow with the crowd but she eventually realises how difficult it is to blend in. It’s like her destiny has already been decided for her and in that destiny, she is not just an ordinary girl that stays on the sideline, but an important personality that takes action.

The Revolutions of Caitlin Kelman is captivating, I found it really difficult to take my eyes off it for a moment. It has a plot that is nicely put together and it portrays the level of disorder that takes place under an oppressive rule.

It is ironical, in the sense that, she escaped Riverton with the hope of getting lost in the crowd and avoiding attention, but from the first day she set her foot in Dominion City she was already on the spotlight.

The idea of a looming danger, a revolution, when it will happen, how it will happen, and what would happen after, are important questions that help to keep your eyes glued to the book.

Matthew Luddon is a writer currently based in Wellington, New Zealand. When he is not writing, he likes to explore the local wilderness and play with his daughter, a slightly-too-energetic toddler.