Children of the Enemy by DJ Swykert – Book Review

Children of the Enemy by DJ Swykert – Book Review 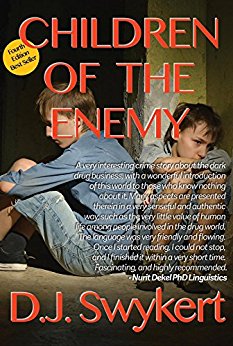 Jude St. Onge is a man on the run. He is an addict who has stolen a large cache of drugs from Detroit drug kingpin Mitchell Parson, who is determined to retrieve the drugs and take his revenge on Jude.

After the torture slaying of Jude’s wife, and the kidnapping of Jude’s daughter, Angelina, the last thing Mitchell Parson expected to hear when he picked up the phone was: “I have your sons.” Raymond Little, with a murder conviction in his past, and newspaper reporter Ted Rogers have become unusual allies with Jude in an attempt to rescue his daughter. Together they kidnap Parson’s two boys, hoping to secure Angelina’s release.

Risks for both hostage-takers skyrocket as the two sides square off, while Detroit Homicide Detectives work the case unaware of all that is at stake in the investigation. Only Ray and Ted can save the endangered children in Children of the Enemy.

‘Children of the Enemy’ is a hard-hitting novel by American author, DJ Swykert, depicting life in the drug-fuelled underbelly of Detroit society.

We’re introduced to a number of unsavoury characters, from Jude St Onge, a double-crossing drug dealer, to Mitchell Parson the local drugs baron who has a number of enforcers to do his dirty work; I confess at the beginning to not really caring much about any of them.

My interest was aroused when we met Jude’s daughter, Angelina who is most definitely a victim and someone with whom the reader can sympathise. Ray is our anti-hero who tries to right a wrong, with the help of a rather unwilling accomplice in the form of a journalist called Ted.

If you don’t have a strong stomach then the violence will probably be excessive. If I’m honest, I did skim-read some bits as I got the gist and had no desire for any additional graphic illustrations of the scenes in question.

The structure of this book is quite straightforward. The author has made use of a variety of literary devices to highlight his descriptive passages. The story is written in the third person with the action viewed from the perspectives of various different players.

I was a little confused at times as we delved into the heads of several characters in the same section. The format occasionally left me wondering who was speaking but this takes little away from a tale which was, in the main, very well told.

This book definitely hits the ground running; the pace is fast and consistent, with a solid and purposeful plot. This isn’t a story I would have chosen if I hadn’t been asked to review it however, I found myself enthralled.

If you enjoy an action-packed, bare-knuckled read, this book is for you. DJ Swykert knows his craft and I award ‘Children of the Enemy’ a well-deserved four-and-a-half stars. 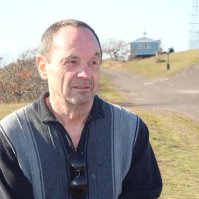 His novel, Maggie Elizabeth Harrington, won a literary competition with The LitWest Group in Los Angeles in 2002.