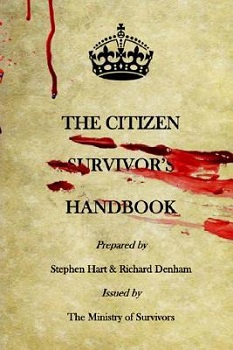 During the 1940’s Britain suffered a national catastrophe that would become known as ‘The Great Tribulation’ by its survivors. The remnant of His Majesty’s Government formed a department known as The Ministry of Survivors, the mandate of this office being to help, guide and inform the public through the anarchy around them.

During the early years they produced and issued a handbook known as ‘The Citizen Survivor’s Guidebook’. However, as the situation became more desperate, the guidance within this book quickly became redundant. The Ministry deemed that the only remaining course of action was to produce a second edition; informing people to evacuate the chaos of the towns and cities and flee to the countryside, focusing on wilderness survival and how to be self-sufficient on the move.

This is a surviving copy of that handbook…

After the original Great Tribulation in the 1940s, the remnant of His Majesty’s Government formed a department known as The Ministry of Survivors who were charged with helping and guiding the public through the chaos they found themselves in. Their original ‘The Citizen Survivor’s Guidebook’ has been updated now, as we find ourselves amidst struggles and must flee towns and learn how to fend for ourselves.

Just like the survival manuals produced to see the British through World War One & Two, the Citizen’s Survivor Handbook is a tongue in cheek guide for life in troubled times. And we are in them. The fact of the matter is that ‘the Cavalry aren’t coming and no-one is going to rescue you.’ So rather than panic, what do we do?

Much makes you smile with familiarity, including the first set of commandments:
Don’t trade in sterling, it’s only good for fire fodder.
Don’t believe other people’s accounts of Britain’s current situation. They have deluded themselves with false ideas based on misinformation and propaganda.
Do avoid talking about the old days or deluding yourself things will go back to normal.

And in fact some of the practical tips on how to bug out and battle on are still very relevant. Getting through rough times involves knowing how to keep warm when camping out at night (useful for Glastonbury), what you need to pack for emergencies (that will help me declutter my handbag) and who to avoid (great for ducking water cooler conversations).

The latter could raise some eyebrows and feels a bit out of date in a theoretically more liberal society, as it includes women (‘female company, though appealing, will likely result in having to deal with hysteria, venereal disease and unwanted pregnancy’), townies (‘bully denizens’) and the Church of the Remnant (‘dunce cap-clad wrong-uns’.) But it’s all written with enough imagination and irony for the reader to keep things amusing rather than offensive.

The sagest piece of advice almost feels meditative. ‘Your end goal is your own Shangri-La’ they write. Yes, and sometimes smiles are needed to get there.

The Citizen Survivor’s Handbook is a good book for a present or light afternoon read.