Telemachus is author Peter Gray’s latest book. It is told through the medium of a colony of migrating birds, this is essentially a love story which explores the meaning of the word ‘love’ to different individuals.

It’s about pain and joy, illusion and reality. It’s also about the fragility of love and the way it can be destroyed so easily for some, while for others, it’s the immutable spine of their very existence.

Bizarrely, the seed for this idea came one summer’s day, back in the mid Nineties. I had just said goodbye to mother-in-law when I noticed a blob of jelly at my feet in our garden. But it was a breathing blob with tiny eyes and a miniature beak; perhaps a hint of some very primitive feathers. Being an animal person, I couldn’t just let it die, so, with my two daughters, we constructed a nest and wondered about how we might feed this tiny creature, presuming it to be a baby house martin.

Anyway, we were successful. The girls knocked on neighbours’ doors initially asking if they had any flies we could feed to ‘George’ (as it became known) – not that we had any idea of it’s sex, simply decided it was a boy. It grew into the family, came for drives in the car and, when it got tired of watching TV in the evenings, would climb up under my shirt collar and go to sleep.

We fed it cat food with surgical forceps – which wasn’t very welcomed by Clouseau, the cat. Then it started to fly. But, as it wasn’t growing very well, we had to keep it in the hot press at night for added heat. As it got stronger, we would take it outside for flying practice. Then, one day, it spotted an open window in the kitchen – and was gone.

Bereft, we searched the valley where we lived, but never got a glimpse of it again.

Telemachus is my attempt to trace its path in life, but it became a lot more than that.

“This is my son, mine own Telemachus, To whom I leave the sceptre and the isle, -.” Alfred, Lord Tennyson 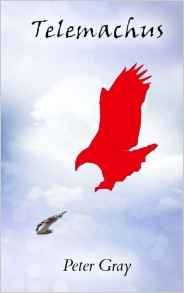 Tom John-Mary has two contradictory anticipations in his early days, both about females who will have a future influence on his life. Daisy, an unwelcome intruder, and Sally, the love of his life.

Daisy inserts herself into his respected family and Tom’s belief that Sally is to be his gift from Aves, God of Birds, is shattered. Meantime, Sally becomes paired with Jacob who, at an early stage, mistreats her and absconds.

Telemachus is the big red eagle at the end of the northern valley and from whose talons none return. Tom doesn’t know if he’s real or an illusion, as none ever return to say they’ve seen him. He’s the threat that’s there in the face of all life, the danger that’s met around any corner. In some ways, he’s the existential response to illogical teaching and distorted reasoning.

Follow this incredible story and discover the storms, twists, turns, tragedies and migrations that Tom and Sally have to endure before love can really start to soar.

Peter Gray was born in Dublin in 1941 to a very large family. His father was a Commandant of the Irish Army.

After university, Peter went into veterinary practice in Holsworthy, Devon. He later developed an equine practice in County Cork and held a UK horse racing permit before returning to practice in Shropshire and then Herefordshire.

During the foot and mouth outbreak of 2001-2, Peter was working for DEFRA and was a main witness for them in major litigation following the outbreak.

In addition to Telemachus, which won 1st place in the 2016 Writers Digest Self Published e-Book Awards, he has also published 12 equestrian books as well as a memoir entitled Premonition – A Story of Ireland.

Peter has been twice married and has seven children. He is now, more or less, retired from clinical practice.