In the Land of Milk and Honey by Nell E. S. Douglas – Book Review

In the Land of Milk and Honey by Nell E. S. Douglas – Book Review 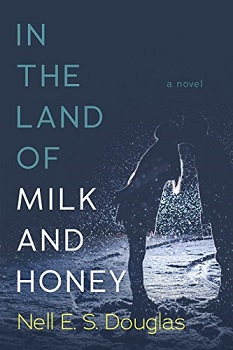 In the Land of Milk and Honey

When Gabrielle “Bree” Valentine awoke in a hospital bed with a newborn baby, she centered herself and rebuilt. Bree didn’t think about her mental breakdown, lost memories, or the features of a stranger emerging daily in the face of the son she is raising alone.

Five years later, on a weekend in the Hamptons, a chance encounter with a man unlike any other jars her—bone deep. Daniel Hawthorne Baird II, wealthy, dangerous, British aristocrat, gravitates to Bree like caviar on crostini.

In his relentless obsession with Bree, their lives entwine despite Bree’s resistance. With the unconditional support of friends she calls ‘family’, Bree confronts the most difficult questions of her life. Unearthing the painful mysteries behind who fathered her child, who the real Daniel Baird is, and the irrepressible desire driving her towards a man destined to be the end of them both.

I chose this book to review because of the title. A promised land, something that is worth fighting for even though there maybe be lots of downs before the high. The book didn’t disappoint.

The story begins with a chance meeting of two people : Daniel and Gabrielle “Bree”. Daniel teetering on the edge of darkness, young Gabrielle at university just beginning her life on a night out with her step sister Vi and friend Jill, having got separated from them she encounters Daniel and the pull towards him is magnetic. An instant frission, connection which leads them to a second date which was a joining of minds and body! Then when Daniel didn’t turn up the next time Bree goes into a spiral downward path losing her way!

A romance suspension is certainly what this book contains for its readers. Written for most if it from Bree’s point of view, with a couple of chapters from Hunter who is a long time friend of Daniel and knows him like a brother. Hunters story fills in a few gaps that are missing about Bree.

Informal style of writing, which is very easy to read has us taking in the depths of darkness that the two main characters go through and the highs. The author wrote so well I was totally in the those places.

The characters, of which there are a lot, take time to get to know, but once I worked them all out they were brought to life. I particularly loved August with his gentle, sensible and noble self and his great love and friendship for Bree and her son Tristan.

It was good storyline with lots of twists and turns to keep me hooked. I did, a few times have to re-read a passage or two due to so much detail though.

A brilliant read. I thoroughly enjoyed it, and definitely recommend you read it too. Well done Nell E.S. Douglas.

Nell E. S. Douglas has possessed a deep, abiding love for written words since childhood. The transition from reader, to writer, was a natural one. Her first stories, penned on the lined pages of class notebooks, were inspired by her mother’s poetry and epic tales of travel, and a professorial inquisitiveness inherited from her father.

Following college in Florida, Nell exited the world of pure imagination, and entered the one of business, successfully establishing a career in sales, and developing a cup-a-day habit (of coffee).

Today, Nell writes everything from story ideas to essays during the spaces in-between domestic goddessing, and contributing as a managing partner to a thriving small business. Nell resides in Florida, with her husband and their children, passing on the traditions of her mother, and sinking her feet in the sand whenever possible.