My former school friend Bill has recently retired from a career in aircraft engineering. Whilst working for manufacturers and airlines he maintained an interest in amateur flight through gliding and flying microlight aeroplanes. His current aircraft is a Skyranger Nynja which he built himself.

For some time we have been discussing a flight but our schedules and the weather had to line up. A few days’ ago we finally managed it.

My flying experience is limited to just eleven return commercial flights, most within the British Isles and none longer than three hours. I must admit that I was a little daunted about being two thousand feet in the air in an aluminium framed plastic box. My wife was even more anxious for my safety!

Bill is based in Hertfordshire and he took off around 9.30am on route for a private landing field in Sussex about 20 miles from my home. I arrived in good time partly because I was anxious about driving over the private level crossing on the track to the field, but that is another story.

The day was mild and sunny with just a few wispy high clouds. I was greeted by Tim who was managing the field and Graham who was exercising his dog. They were keen to discuss their planes and Graham took me in the small hanger to show me his own Nynja to give me a good idea of what I was in for. He also made me a coffee so I felt obliged to hit some balls for his dog. Great fun although the dog managed to get mud all over my jeans. All the while we were listening for the sound of Bill’s approach and then we saw him circling the field. Graham not only identified which model of Nynja it was but from the sound he also correctly predicted which engine was installed.

Bill landed and completed his registration. I then listened while he chatted to Tim about their planes and mutual acquaintances. The conversation drifted to aircraft failures and lucky escapes! I did my best not to panic.

Finally Bill was ready for our flight. He sat me in my seat and gave me a short safety briefing. I was relieved to learn that the plane had its own parachute.

It was time for the big moment. Most microlights consist of a three wheeled open buggy with an engine on the back and a large wing mounted above. The Skyranger Nynja is shaped like a conventional aeroplane but even so I was fully aware of our vulnerability. We donned life jackets in case we had to land in the sea and I was strapped in with a warning to keep my feet balanced on the frame in front of me as the floor would not take any weight. All loose items were stowed away and, with my camera in one hand and a map on my lap we taxied out to the end of the runway.

I asked Bill if he needed to go all the way to the end and his response was that there is no value in runway behind you! In the event we needed no more than a third of the length before we were in the air. We seemed to climb slowly and quietly, very different to the thrust and roar of a climbing jet, yet within a couple of minutes we were circling round the field and on our way towards the coast. It was only at this stage that I was sure that I really wanted this experience!

We gave Parham glider field a wide berth and flew near Arundel, a town that I know well. It was fascinating to see the Castle and the Cathedral from the air. Next came Littlehampton where we turned right to follow the coast westwards.

Traditionally the pilot sits on the left but the plane can be piloted from both sides. Bill let me take the joystick for a while which was fine until we were hit by a gust of wind. After that I concentrated on the views and taking pictures.

After Bognor Regis came Selsey Bill, Chichester Harbour and Hayling Island. Portsmouth came into view and we could see the Spinnaker Tower and our Navy’s new Aircraft Carrier. Time to turn left across The Solent towards the Isle of Wight and Sandown Airport. We had been listening to the radio throughout the flight and around this time we called Sandown Airport to request permission to land. 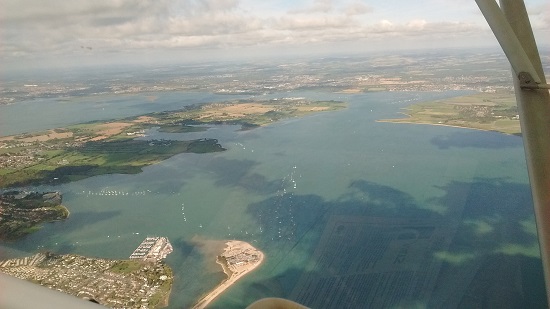 Until this point I had felt surprisingly good. I had no fear and my tummy felt good. We located the airport and Bill eased the throttle to slow down for the approach. As we turned sharply at what felt like zero speed my stomach churned and it required a few deep breaths to maintain my dignity as we landed very comfortably on the grass runway. The journey had taken less than an hour.

Sandown Airport was much bigger than the airstrip that we had come from. There were several small aircraft parked beside the runway and planes were taking off and landing every few minutes. The Controller told us by radio where to park and we walked to the Tower to register and pay the landing fee.

The airport is just over two miles from Sandown town centre and seafront. The airport hires out electric bikes at a reasonable cost but our time was limited so we settled for lunch at the airport café which was busy feeding flyers from across the south. My burger, chips and salad was simple but well prepared and modestly priced.

The Needles and Home

Rested and replete we took off again and flew west across the island towards the Needles which we circled at a low height. We then followed The Solent eastwards. To our right we had the north coast of the island with excellent views of Yarmouth, Cowes, Osborne House and Ryde. To our left we could see Hurst Castle and Calshot. The former was interesting because it was the setting for Robin Crumby’s book ‘Hurst‘ which I recently reviewed for Whispering Stories. Calshot also has a personal connection because for my last big birthday I was treated to a taster session in Calshot Velodrome. (Note to self; I must write a review of that day out). 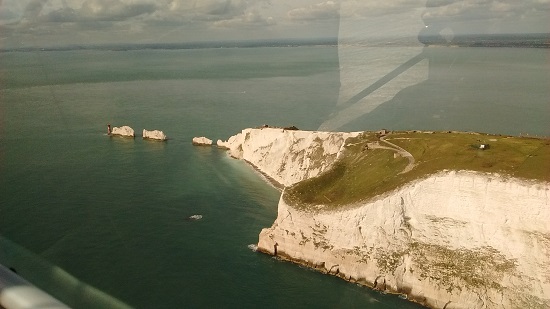 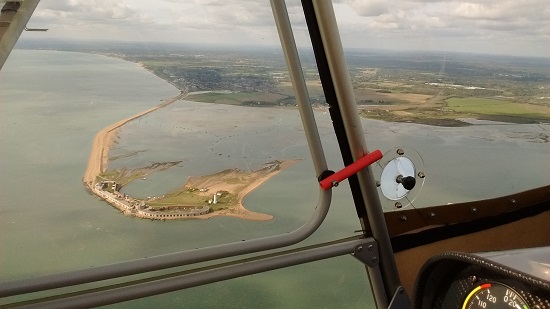 Soon Portsmouth was in sight and we then followed the mainland coast reversing the route that we had followed that morning. Maybe it was the different angle or a change in the light but somehow the colours of the marshlands looked more exuberant in the afternoon with shades of blue, green, turquoise and orange.

In what seemed no time at all we were approaching Littlehampton and in the distance we could clearly see the Seven Sisters and Beachy Head but it was time for us to turn inland and head home. We again landed in comfort and after Bill had topped up his fuel I waved him off on his journey back round London. I drove home, still buzzing with adrenalin. Julie welcomed me back, delighted to see me in one piece!

Although the experience has ended I have great memories of a special day and dozens of pictures. I also found that by entering the plane’s registration number into the Planefinder.net website I can retrace the flight in full with times, speed and height detail.

Try it for yourself

Not everybody knows a “Bill” but microlight taster flights are available across the country for under £100 through various operators including Virgin Experience Days and Into the Blue.

Alternatively find the details of your local club and give them a call. You will find that amateur flyers are passionate about their hobby and keen to discuss it at almost every opportunity.