Today we welcome author Heather Grothaus with the cover reveal for her upcoming new book ‘Constantine‘, which will be released on 7th February 2017. This post contains affiliate links. 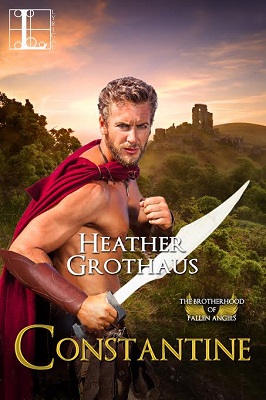 A shadow has fallen over the medieval Holy Land, and four courageous Crusaders have banded together to root out the enemy.

The Brotherhood of Fallen Angels have dedicated their lives to the pursuit of justice. But is there room in their hearts for love?

Evil is everywhere, and General Constantine Gerard has witnessed more than his share. Yet he never dreamed the ugliness that darkened the castle at Chastellet would cost him his wife and child. Now he has nothing left to lose—and nothing to live for, save the vengeance he vows to unleash on Glayer Felsteppe, the man who destroyed his family.

Theodora Rosemont, too, has suffered at Glayer’s hands. When Constantine finds her, she is barely alive, and desperate to find her baby, who was snatched away by Glayer’s men mere moments after his birth. Bonded by their common enemy, Constantine and Dori embark on a treacherous journey, determined to rescue the child and vanquish the father. But as emotions run high and secrets are revealed, passion could compromise their quest, leaving more than just their hearts in peril . .

Heather Grothaus has published eight medieval romances since 2006, which have been translated into several foreign languages. She fell in love with historical romance after reading a Kathleen E. Woodiwiss novel when she was far too young to be doing so, and has never looked back, building a reputation for crafting twisting adventures, laugh-out-loud dialogue, and heart-wrenching emotion.

When she’s not writing, she spends her time homeschooling her children, gardening, listening to music, reading, and watching Sherlock. She lives on a small farm in Kentucky with her family.