Robert Langdon, Harvard Professor of symbology, receives an urgent late-night call while in Paris: the curator of the Louvre has been murdered. Alongside the body is a series of baffling ciphers. Langdon and a gifted French cryptologist, Sophie Neveu, are stunned to find a trail that leads to the works of Da Vinci – and further.

The curator, part of a secret society named the Priory of Sion, may have sacrificed his life to keep secret the location of a vastly important religious relic hidden for centuries. It appears that the clandestine Vatican-sanctioned Catholic sect Opus Dei has now made its move. Unless Landon and Neveu can decipher the labyrinthine code and quickly assemble the pieces of the puzzle, the Priory’s secret – and a stunning historical truth – will be lost forever.

I decided to read The Da Vinci Code largely because of the storm of controversy that followed it’s release. I had never heard of Dan Brown, nor was I particularly well educated around the bible, so my decision to read this book was a little bit of a surprise one. I was not disappointed.

The book follows the main protagonist Robert Langdon, a Harvard University professor of symbology. He is disturbed by the authorities in the middle of the night, having been implicated in the murder of the museum curator at the Louvre, Paris. With the assistance of police cryptographer Sophie Neveau, they embark on a quest to clear his name and find the real killer.

The book itself is a fictional work, but Dan Brown has done an exhaustive amount of research into the history and development of Christianity, and the sacred ‘Holy Grail’. That said, I decided to take the book on face value as a thriller, and my decision to read it was rewarded.

I’m not going to provide any spoilers in this review (the book is documented well enough to allow everyone else to do that), but what I will do is make a few observations about the book itself. The way that the story flows is seamless. The pair go from Paris, taking in London and Rome. The scenes are beautifully set placing you right in the thick of the action. The pace of the story is fast throughout, barely allowing you to pause for breath. I found the way the book was written allowed and often forced longer spells of reading that I had planned. The chapters are short, often ending with a hook, urging you to read “just one more”. The twists and turns of the plot leave you second-guessing what is going to happen next.

For some, the subject matter of Christianity would put them off reading his book. As a non-Christian, I had no issue with reading The Da Vinci Code. If you do read this book, I am certain that you will enjoy it for what it is; a well-written, fast-paced thriller that will have you glued to the pages. 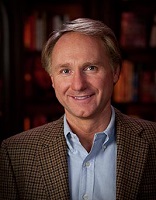 Dan Brown is the author of numerous #1 bestselling novels, including The Da Vinci Code, which has become one of the best selling novels of all time as well as the subject of intellectual debate among readers and scholars. Brown’s novels are published in 52 languages around the world with 200 million copies in print.

In 2005, Brown was named one of the 100 Most Influential People in the World by TIME Magazine, whose editors credited him with “keeping the publishing industry afloat; renewed interest in Leonardo da Vinci and early Christian history; spiking tourism to Paris and Rome; a growing membership in secret societies; the ire of Cardinals in Rome; eight books denying the claims of the novel and seven guides to read along with it; a flood of historical thrillers; and a major motion picture franchise.”

The son of a mathematics teacher and a church organist, Brown was raised on a prep school campus where he developed a fascination with the paradoxical interplay between science and religion. These themes eventually formed the backdrop for his books. He is a graduate of Amherst College and Phillips Exeter Academy, where he later returned to teach English before focusing his attention full time to writing.