My Daddy, The Serial Killer by Cindy Kovacik – Book Review

My Daddy, The Serial Killer by Cindy Kovacik – Book Review 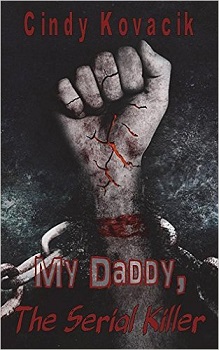 That is, until she made the mistake of descending those cellar steps and viewing the first of many horrors down below.

You see, her father wasn’t who she thought he was. He wasn’t the loving and “normal” daddy that all the other kids had. He was very different. She soon realises how different as the years pass and unspeakable things begin to happen.

Will Katelyn be able to cling to her sanity after witnessing all of Daddy’s horrors?

Dark and gritty. That’s my super-abbreviated roundup of this book.

The story begins with Katelyn, 6 years old, disobeying Daddy and going down into the cellar where she’s been told never to go. That’s because Daddy likes to dismember women down in the cellar and like all responsible parents, he doesn’t think it’s suitable for a little girl to see.

The book follows the life of Katelyn and her attempts to free herself from this twisted life, she has no other family besides her father and nobody helps her when she tries to tell them what’s going on in her house. This plays on the fear that we all have of not being believed and also how some children are failed by the system time and time again.

I didn’t really encounter any twists in this story, though that certainly isn’t a criticism. Katelyn has been raised by an angry, unstable father who has alternated between abusing her and treating her like a princess. She essentially has Stockholm Syndrome though she fundamentally understands the difference between right and wrong, this book explores what a child would do to survive a horrible upbringing like this when they know that they can’t escape their violent parent. By keeping it as realistic as possible, given the fact that the main character’s father is a serial killer, the story packs far more of a punch.

My Daddy, The Serial Killer is told from Katelyn’s perspective as she gets older, and the tone of the writing changes with every leap forward in time which I thought was excellently done. It was the thoughtfulness of this book and the fact that it wasn’t overly melodramatic that really appealed to me, I think that Cindy Kovacik is going to be an author to look out for in the horror and psychological thriller genre if this book is anything to go by.