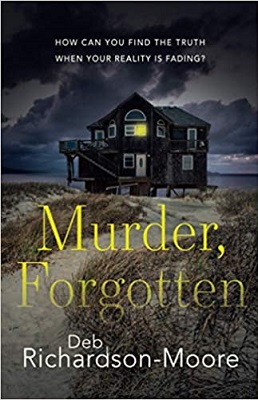 Julianna Burke, bestselling mystery novelist, has a secret that those closest to her are hiding from the world. Julianna is losing her memory, and with it her powerful gift for storytelling that propelled her to fame.

A further devastating blow comes when Connor, Julianna’s beloved husband, is murdered. Even this is not something Julianna’s mind can hold on to, and every day her assistant has to break the heart-wrenching news all over again.

Julianna is desperate to know what happened to her husband. As she battles her failing mind to investigate, a detail of the murder surfaces that makes Julianna question everything she’s ever known. Somehow she must fight to find the truth, even though her grip on reality is fading…

This is one of the most well written mysteries I’ve ever read – I was hooked from the first page and my attention was held until the very end.

The chapters alternate between the POVs of Julianna, a famous author with a penchant for daydreaming, and her adult daughter, Logan, who is witnessing the decline of her mother’s health and memory.

Connor, Julianna’s husband and great love, is murdered in their home and nobody can determine how anyone could have entered the house without waking the entire household.

Julianna is an unreliable narrator with her diminishing memory and tendency to daydream for long stretches of time while writing her books, we know that she misses a great deal of what’s going on around her. This is also a massive contributing factor to her relationship with her daughter – Logan is now an adult and coming to understand her mother as a person rather than a disappointing parent.

Logan is more attentive to the things going on around her and is the driving force of the investigation, uncovering secrets within the small island community.

The clues are subtle but dished out liberally so you have plenty of potential leads to consider if you like trying to work out whodunnit while you’re reading, but it’s impossible to be sure until last few pages of the book. The pacing is perfection, with a lot of characters and events propelling the story onwards.

I would certainly recommend this book for fans of murder mysteries. The paperback edition includes some questions for book groups at the end and I’m inclined to agree that this would be a fantastic read for a group to discuss.

With the publication of “Murder, Forgotten,” Deb Richardson-Moore departs from her popular Branigan Powers series and introduces us to an unforgettable protagonist and a heart-pounding mystery that explores the vagaries of the mind and the way memory can betray us. How does grief alter one’s memory? Is there more truth in fiction than in reality? This is a novel that will have readers questioning their own motivations and those of the protagonist, Julianna Burke.

Deb Richardson-Moore is the author of four (4) fiction titles and a memoir, “The Weight of Mercy,” about her early years as a pastor at the Triune Mercy Center in Greenville, S.C. A national award-winning former reporter for The Greenville News, Deb is a popular speaker at book clubs, universities and churches. She has also won numerous awards for her philanthropy and community involvement.

A graduate of Wake Forest University, Deb lives with her husband in Greenville, South Carolina. They are the parents of three grown children.