Behind every great love is an epic story waiting to be told.

My fourth novel Letters to Strabo is both a love story and a coming-of-age tale, set in the late 1970s. It takes the form of a fictional odyssey recorded with disarming honesty by my protagonist, an innocent young American writer called Finn Black. His adventures, both funny and evocative, follow closely the itinerary taken by Mark Twain on his own tour around the Mediterranean a century earlier in: The Innocents Abroad. The novel is structured around the seventeen chapters of the ancient Greek Strabo’s great work: Geographica; a book that Twain quoted from extensively in his own tale. In Finn’s words:

“I researched how famous travel writers made their first journeys for a series of articles. It fascinated me how they all took something worthwhile out of that first experience on the road, whether they later became writers, journalists or even philosophers. It opened my eyes to all sorts of new possibilities I wanted that life. I wanted to get going, to write and make my fortune. Find out what had really happened to my pa and maybe find a bit more of that mythical free love I’d been missing, too.”

As he travels, the amazing places Finn visits, the art and cultures he comes across and most importantly the people he meets are faithfully described by him for Eve, his long-distance pen-pal. Eve’s replies, her Letters to Strabo as she calls them, reveal to Finn not only her own hopes and dreams but also things about her own past too. But unfortunately Finn is not quite as faithful in real life to Eve as he pretends in his letters! When he first arrives in Europe, he teaches for a few months in Bilbao on an exchange scheme, but then meets a beautiful French woman and art collector, Françoise Circe. A woman he feels is totally out of his league:

“I met Françoise during a visit to the local Gallery Lazarus. A young artist called Mikel Díez Alaba was exhibiting his Japanese-inspired paintings and causing quite a stir in the local press. I’d been recommended to see the exhibition by my Spanish friends. Reluctantly, I did. As I’ve said, I was somewhat stunned when that gorgeous woman accepted my cheesy pick-up line. I panicked about where to take her. But luckily she knew a place.”

Despite this inauspicious start, Finn and Françoise set off together on an extended train journey to Paris. Their first stop is the pulsing city of Lisbon where they discover the famous Pastéis de Belém, sweet pastries still made in a bakery which has recreated the original recipe since 1837:

“We headed towards the Café Belém, famed for its patisserie. It was heaving. When we entered, the noisy interior was hot and sticky in the thick afternoon air. We had to wait in line to be served but it was well worth it. When we got to the front, the custard tarts more than made up for the wait; they were dripping exotically with sugar and cinnamon. We washed them down with strong coffee served in little paper cups, crossing our arms amorously as we did. She had a way of looking at me with those sapphire-blue eyes which made me feel I was all she wanted…”

Here they come across a misfit Spanish-speaking couple arguing noisily. Finn draws the ire of the man as he admires Finn’s companion:

‘You want to play with her, I play with you. Look, I compare you, because of our frightfully mechanized epoch, to a kind of Don Quixote, without any other windmill before you than your own head…’

Their journey continues through Seville, Barcelona, Nice and Paris and then finally to Venice. Here Finn finally discovers the disturbing truth behind the façade of Françoise Circe, the art collector, as her real reasons for undertaking her journey with him are finally revealed… 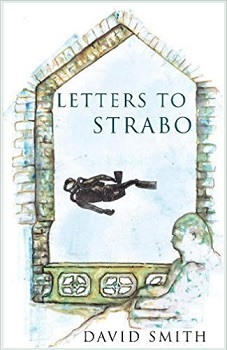 Adam Finnegan Black, or ‘Finn’, an innocent young American who is insatiably curious about life, made a promise to his mother before she died: To find out what really happened to his father…

His ambition is to be a travel writer, like his heroes: Mark Twain, Ernest Hemingway and the ancient Greek ‘father of geography’, Strabo. His journey of discovery takes him through the radiant literary, cultural and picturesque landscape of the Mediterranean.

Following his heart and inspired by Letters to Strabo, written by his long-distance pen-pal Eve, Finn gradually learns more about himself but also about the woman he hopes will one day become his wife.

Quite simply one of the best coming-of-age novels you will ever read: Letters to Strabo will appeal to lovers of literary fiction, good travel writing and the classic works of Ernest Hemingway.

David Smith is a British author who has now published four works under the Troubador imprint. His first novel Searching For Amber has been described as “A powerful and notably memorable debut” with a review describing it as “masterly and confident” and another as “Extraordinary, poetic, enchanting, sublime”.

In addition to writing, he is currently CFO of a blue chip UK public company and lives near the South Coast in England with his wife and three teenage children.