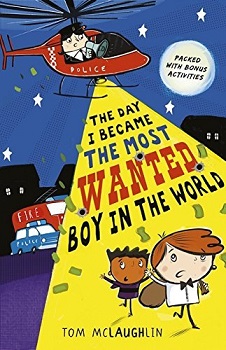 The Day I Became the Most Wanted Boy in the World

Nine year old Pete is about to have the worst day ever in this hilarious adventure, perfect for fans of Pamela Butchart and Frank Cottrell Boyce. There’s nothing Pete loves more than sitting at home, being quiet and watching the snooker. But when he accidentally bumps into a local gangster, Pete and his super annoying next door neighbour, Sammy, are caught up in a series of events that get worse and worse at each and every turn.

Now Pete is in a race against time to prove his innocence – but it’s tricky to do that, especially when everyone thinks that you’re the most wanted boy in the world.

Begrudgingly he goes. Upon walking past his neighbour’s house he is squirted with a water pistol which hits him right in the eye. He then stumbles into a man walking past holding a piece of paper and nearly knocks him over – both the man and Pete drop their pieces of paper.

Pete retrieves them both and gives the man back his. The man then carries on his way. The squirter turned out to be Sammy, Pete’s next door neighbour and he wants to be friends.

Pete tells him no and to go away but Sammy follows him. When he reaches the shop Sammy is still following him. Pete gives his note to the shopkeeper. However, it would seem that the note isn’t the list of items wanted, but a note stating that he is robbing the place.

With Sammy still brandishing his realistic looking water gun, the shopkeeper hands over the takings from the till – and some tins of Pilchards.

The two try to explain that they are not robbers, but no-one believes them. It is up to them to stay low and try and prove their innocence, but that is easier said than done.

The Day I Became the Most Wanted Boy in the World is a massively entertaining book for children. I would guess for those around seven to twelve years old, depending on their reading skills.

From the first page to the last there is plenty to laugh about. The story is just one big laugh along with a quirky, ridiculous (in a good way) plot.

The pages also include fun small illustrations – these really help the reader to engage with the story.

For a child that likes daft, fun, laugh-out-loud books, this would be perfect.