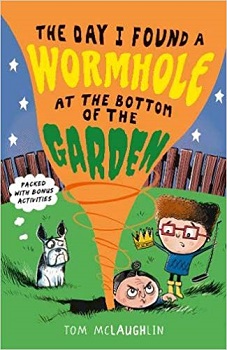 Nine-year-old Billy is digging for buried treasure when he finds a wormhole in the garden! And to make matters worse, all sorts of people from the past begin to clamber through it.

Now Billy – aided by his pet dog, Shakespeare – is in a race against time to close the wormhole and round up all the people who have slipped through it, before history is changed for ever! No pressure then…

Nine-year-old Billy’s Grandmother has come over to his home to watch him whilst his parent go shopping. Billy loves to go exploring and loves his metal detector even more and he’s had his eye on a spot at the very back of the garden for a while.

He knows that his Grandmother can’t watch the TV show Antiques Roadshow without falling asleep, so he has recorded numerous episodes for her and waits until she is snoring, then he grabs his metal detector and his spade and is excited about what he might find.

As he arrives at the back of the garden he notices a strange orange glow so he uses his metal detector to see if the glow is from something metal and soon is starts buzzing. Reaching down he grabs the item and is shocked to discover it is a crown, he even more shocked to find that it is still attached to someone’s head and they are not happy, especially when he seems to be trying to steal Queen Victoria’s Crown.

As the day goes on more and more people from history make an appearance and Billy doesn’t know how to return them to their time and close the hole up, but with the arrival of Einstein, can they work together to send everyone back to their rightful time?

The Day I Found a Wormhole at the Bottom of the Garden is the third book in ‘The Day I found’ series. Each book features a different child in a different scenario, all can be read as standalone’s.

The plot is amazing, not only does it contain a fun adventure but it also contains factual information on the characters that appear through the wormhole, such as the Romans and Shakespeare. Billy aptly has a dog with the same name too.

It is a quick read and was entertaining throughout. The story had plenty of scenes that will make children giggle such as historical figures watching a toaster make toast.

This is a book that will keep kids interested from beginning to end. It would be a fantastic choice for a child that likes daft stories and stories that will make them laugh via not only the words but the black and white illustrations throughout too.

What did you think of The Day I Found a Wormhole at the Bottom of the Garden? Share your thoughts in the comment section below!