The Strange Case of Dr Jekyll and Mr Hyde Continues…

Seven years after the death of Edward Hyde, a stylish gentleman shows up in foggy London claiming to be Dr Henry Jekyll. Only Mr Utterson, Jekyll’s faithful lawyer and confidant, knows that he must be an impostor – because Jekyll was Hyde. But as the man goes about charming Jekyll’s friends and reclaiming his estate, and as the bodies of potential challengers start piling up, Utterson is left fearing for his life … and questioning his own sanity.

This brilliantly imagined and beautifully written sequel to one of literature’s greatest masterpieces perfectly complements the original work. And where the original was concerned with the duality of man, this sequel deals with the possibility of identity theft of the most audacious kind.

Can it really be that this man who looks and acts so precisely like Dr Henry Jekyll is an imposter?

Beginning Seven years after the ending of Dr. Jekyll and Mr. Hyde, by Robert Louis Stevenson, in which Mr. Hyde was found dead, meaning that Dr. Jekyll must of been dead too, as they were one and the same. A man claiming to be Dr. Jekyll has taken up residence in his old home. All of his old acquaintances believe the story of where he had been for the last seven years, all except Mr. Utterson, who knew him well as his friend, and lawyer.

Mr. Utterson was within days of become the sole beneficiary of the Dr. Jekyll estate and now some charlatan has arrived looking, sounding, and acting like his old friend, but he was one of the only people to know that Mr. Hyde and Dr. Jekyll were the same person, and that as Hyde is dead, then Jekyll is too, meaning that this man is most certainly an impostor.

Utterson makes it his mission to discredit the forger. After trying the police with no luck, he then visits his friends, one by one, but it would seem none of them agree with him. Doing many thinks out of the ordinary, for such a usually sane man, is Mr. Utterson right and this man is an impostor after stealing Dr. Jekyll’s estate, or has his desire to claim the estate for himself made him not be able to see that this man really is his friend?

I haven’t read the classic Dr. Jekyll and Mr. Hyde, but this book has given me the desire to go back and see where the story begins. At only 256 pages it was a quick read. It flowed beautifully with a wonderful plot that I’m sure Mr. Stevenson would of been proud of. It had me hooked right from the first page.

As daft as it may sound, this book reads as nice as it looks, and feels – there is a softness to the book that makes it feel lovely in your hands. Told you it sounds daft!

The story is told from Mr. Utterson’s point of view, and gives his account of him trying to discredit this man claiming to be Jekyll. The problem is, this possible impostor is always one step ahead of him, driving him to madness. He is adamant he knows the truth, but no-one will believe him.

I read the book in two days, as I didn’t want to put it down. It is flawless. Not very often I use that word, but I connected with the story and found myself totally enthralled and involved in the plot, one that had me thinking how it could very well work today, as identity theft is big business.

I have one little niggle though. Mr O’Neill you are a wicked man, I needed to know the answer, but you never gave it. Whilst I’m 99% sure of it, that 1% is annoying. I now know how Utterson truly felt! 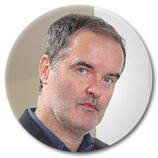 Anthony O’Neill is the son of an Irish policeman and an Australian stenographer. He was born in Melbourne and lives in Edinburgh.

He is the author of Scheherazade, a revisionist Arabian Nights epic; The Lamplighter, a psychological horror novel set in Victorian Scotland; The Empire of Eternity, a history-mystery involving Napoleon Bonaparte and the early years of Egyptology; The Unscratchables, a Swiftian satire featuring dog and cat detectives; and The Dark Side, a crime novel set on the far side of the moon.

Film rights to The Dark Side have recently been purchased by 20th Century Fox for development by Oscar-winning screenwriter Steven Zaillian.