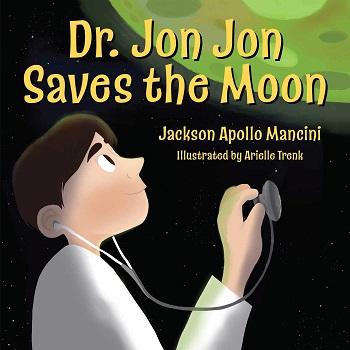 The children on Earth see there’s something wrong with the moon, but it isn’t until they send Dr. Jon Jon to give the moon a checkup that we learn the truth. Dr. Jon Jon Saves the Moon gives us an important lesson: our planet is sick and we must work together to care for it.

Since the beginning of time, kids have looked into the night sky and seen a glowing white moon and twinkling stars. But over time, they started to notice the moon had turned green! Dr. Jon Jon Saves the Moon is the story of what happens when we forget to take care of the world around us. The children of Earth send Dr. Jon Jon to give the moon a checkup and when he comes back, he has a message: the moon is a reflection of what we do to our precious planet and we must work together to care for our one and only home.

Dr. Jon Jon Saves the Moon follows in the footsteps of Greta Thunberg and the many other young people fighting for the health of our planet. Join Dr. Jon Jon on a trip to the moon and back and get inspired to help save the world!

Dr. Jon Jon Saves the Moon is a lovely children’s picture book in which the people on Earth become concerned that the moon is sick and ask Dr. Jon Jon who works for Nasa to find out what is wrong with him. The Doctor soon discovers that it isn’t the moon that is sick it is Earth. It is unhappy with all the waste that is hurting the animals and polluting the seas and the streets.

The book is written by four-year-old Jackson Apollo Mancini who was concerned about the Earth. I presume from the story that the idea was his and that he had help from grown-ups to add some of the more sophisticated sentences. It is lovely to see a child be so concerned about the planet that they used their imagination to come up with a fabulous story.

The book is adorned with full-page bright and colourful illustrations that are beautiful to look at and compliment the story perfectly.

Children will learn a lot about the polluted planet and how they can help to keep it safe and rubbish free. At the back of the book, there is some website that they can go to so that they can find out more information.

This is a really poignant book that is all about working together to care and look after our planet. I’ve said it before in books similar to this. Children seem to be leading the way in the fight against pollution and plastic waste and I hope that when they are older they will see the rewards of all their efforts.

When Jackson Apollo Mancini isn’t in school you can find him exploring the natural world where he is passionate about animal rights and the health of our planet.

Jackson wrote Dr. Jon Jon Saves the Moon when he was four years old, making him one of the youngest authors to begin the publishing journey. He enjoys traveling and learning about different cultures and languages, playing with friends, and dreaming up new inventions. On any given day you will find him picking up litter in his community!

Jackson lives in Alaska with his parents, his dogs Eggo and Lucy, and his rescue guinea pig, Charles Marshmallow Mancini.

What did you think of ‘Dr. Jon Jon Saves the Moon’? Share your thoughts in the comment section below!