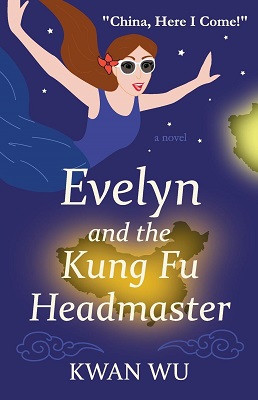 Evelyn and the Kung Fu Headmaster

Born in a London factory and destined to live with the eccentric scientist Ronald for the rest of her life, Evelyn runs away in utter despair and begins her adventure when she bumps into a young and muscular kung fu champion called Guillermo.

Seeing her talent, Guillermo flies her halfway across the globe to his high-tech martial arts university on a picturesque mountain in China.

Evelyn flourishes in the whole new world. She enjoys her new-found freedom. But soon, the time has come when she must fight Victor – a force of evil which is terrorising the whole world.

Is Evelyn ready for the challenge?

Evelyn and the Kung Fu Headmaster is a futuristic, adventurous, YA novel for younger YA readers.

Set between London and China in the year 2130, a deadly virus is sweeping through technology called Victor, having deadly consequences in a world that relies heavily on technology, including pilot-free aircraft and driverless cars.

The Stewart Corp headed by Ronald has created a robot to defeat Victor. Evelyn is an almost human robot. She bleeds when cut, eats normal food, and has emotions and she looks so real that people don’t know she is a robot. It is her emotions and her rash outbursts that cause her a lot of trouble. She believes that Ronald is a robot killer and runs away from him, bumping, literally into Master Guillermo who is the headmaster at the world’s only Kung Fu university.

Evelyn decides that she wants to learn the art of Kung Fu and askes Guillermo if she can travel to China to learn.

I have very mixed feelings about this book. Whilst I always try to read and review books in the eyes of the age group at whom the book is aimed, there are times when I also have to put my adult/mother’s head on and this is one of those times.

The book is a really fun adventure, it is fast-paced, the characters are all lovely, except for Victor, and the book flowed well. I think the world building-needed more attention as we are not told a lot about it, plus we are also introduced to characters at the beginning who don’t have any impact on the rest of the story. These aside, the book is an interesting read and would have been a great book if it wasn’t for how I felt about the headmaster/student relationship.

My biggest gripe is that Evelyn, I know she is a robot, but she is very trusting and it often felt like Guillermo took advantage of that. Such as she is injured when a group of drunk men attacks her one night, Guillermo rescues her (nothing happens to her attackers), he takes her back to his hotel, alone, to patch her up. Yes, he does tell her perhaps she should not accompany him to his room with her being female but she tells him she isn’t like normal females, and he agrees and takes her. They have just met by the way.

She stays the night at his place and then the next day declares she wants to go to China with him and then shortly after off them go. They also seem to get very close, such a eating dinner together in Guillermo’s home alone or cozying up. Again I know she is a robot but she is made out to be a teenage robot (I presume I’m right given that this is a YA book) and Guillermo is the university headmaster of where she is studying. It just didn’t sit right with me to be writing these kinds of scenarios in a YA book. Had Guillermo being one of the students then I might have felt different, but this was a man in power and Evelyn was a young robot girl.

I might be alone in these feelings but I needed to share them to make potential readers aware.

Kwan Wu was born and raised in Hong Kong, a special administrative region of China. She holds a BA in English Studies from the University of Hong Kong. Evelyn and the Kung Fu Headmaster is her first novel.

What did you think of ‘Evelyn and the Kung Fu Headmaster’? Share your thoughts in the comment section below!