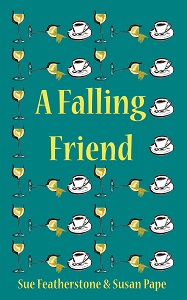 After spending her twenties sailing the globe, making love on fine white sand, and thinking only of today, Teri Meyer returns to Yorkshire – and to studying. That’s when she discovers John Wilmot, the second Earl of Rochester, and poet of all things depraved. What she doesn’t realise is even beyond his grave, his influence over her is extraordinary. To hell with the consequences.

Having gone out on a limb to get old friend Teri a job at the university at which she teaches, it doesn’t take long for Lee Harper to recognise a pattern. Wherever Teri goes, whatever she does, every selfish choice she makes, it’s all setting her up for a nasty fall. But Teri’s not the sort to heed a warning, so Lee has no choice but to stand by and watch. And besides, she has her own life to straighten out.

A clever, raw and hilarious character-driven masterpiece that follows the lives of two friends with the same ambitions, but who have vastly different ways of achieving them.

Teri and Lee have been friends for many years. After Teri returns home from her globe trotting, Lee helps in securing Teri a job at the university where she teaches. Teri has always been particularly self absorbed, and Lee realises that even with time away Teri hasn’t changed one bit, and realisation dawns that things are not going to go well for her friend.

This is a story of everyday life between two friends, the loyal and helpful Lee and the selfish Teri. What brings this story to life is the fantastic supporting characters, they allow both Teri and Lee’s diverse qualities to stand out.

When events happens in Lee’s life she needs Teri’s help, and in a truly remarkable moment Teri actually shows a different side to her egotistical nature, and that it is within her reach to be a true supportive friend.

The majority of this book is told from both Teri’s and Lee’s points of view, from a position of manly having conservations between themselves and the difference of opinion that they both have.

From the start I will admit that Teri really, really irritated me. I couldn’t get past how badly she treated her best friend. Then very briefly I found myself rooting for her not to ruin things. At a couple of stages towards the end of the book she gained some insight into her life. But then towards the end once again she became either clueless or in denial.

I am not sure that this is the sort of book that I would normally go for, but the title hooked me and I wanted to know more. Having read it the title really does fit the story.

There were points in the book when I was cringing at some of the things Teri did. However toward the end of the book I found myself smiling or having a little laugh along with her, and the more I read, the more I wanted to know how it would turned out for their friendship. Maybe I would have found the book funnier if I had not been so irritated by Teri.

If You like a reasonably easy read with leading female characters A Falling Friend a try.

Sue Featherstone and Susan Pape are both former newspaper journalists who between them have extensive experience of working in national and regional papers and magazines, and public relations.

More recently they have worked in higher education, teaching journalism to undergraduate and postgraduate students – Sue at Sheffield Hallam and Susan at Leeds Trinity.

Sue, who is married with two grown-up daughters, loves reading, writing and exploring the cycle paths near her Yorkshire home. Susan is married and spends her spare time walking and cycling in the Yorkshire Dales and on the east coast, and playing the ukulele.