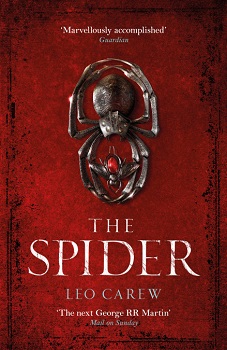 The Spider
Under the Northern Sky Series Book Two

Roper, the Black Lord of the northern people, may have vanquished the Suthern army at the Battle of Harstathur. But the greatest threat to his people lies in the hands of more shadowy forces.

In the south, the disgraced Bellamus bides his time. Learning that the young Lord Roper is planning to invade the southern lands, Bellamus conspires with his Queen to unleash a weapon so deadly it could wipe out Roper’s people altogether.

And at a time when Roper needs his friends more than ever, treachery from within puts the lives of those he loves in mortal danger . . .

The Spider is the long-awaited sequel to The Wolf. Following his success at the Battle of Harstathur, Lord Roper reigns over the Anakim, but is acutely aware that Suthern forces are a threat to the long-term future of the Northern people. With that, a plan develops to wipe out the entire Suthern race, safe-guarding the longevity of the Northern people. With weakened forces at his disposal, to be successful, Roper will have to befriend a savage race of people, the Unhieru, a difficult challenge for anyone, let alone the Black Lord.

With an intricate network of spies, including some very close to Lord Roper, the disgraced Bellamus feeds information to the Suthern Queen, protecting her and her people, along with conspiring to let loose a deadly weapon, so potent that it could wipe out the northerners altogether. This book tells the story of a true battle, north versus south, with a winner-take-all outcome.

The Spider is a wonderfully-written book and follows directly on where The Wolf left off. The journey into the South with the legions of troops is expertly described, putting you right in the middle of the scene. You get a real sense of pride with the troops, and with every dead-end that they experience, you get a true feel for how their morale just keeps ebbing away. With everything to fight for, you will want to keep reading this book, right to the end, riding alongside Roper and his men as they are seemingly thwarted with each attempt to take down the Sutherners. The twists and turns, along with the fantastic descriptive writing of Leo Carew will mean you are in this for the long-haul. I for one cannot wait for the next instalment.

The style of writing is one that I really enjoy reading; that is the chapters are quite short, making it easy to “pick up for ten minutes”. The difficult part is putting it back down again. If you haven’t read The Wolf, I would strongly recommend reading that first as there are many references to events from that book. Whilst you could read this book without reading The Wolf first, reading the first of the series adds context to events that might otherwise have passed you by. The Spider is a fantasy masterpiece that you will enjoy from front cover to back.

The third of four children, Leo Carew grew up in the centre of London, in the shadow of St. Paul’s Cathedral. Inspired by audiobooks, he developed a late interest in reading and began trying his hand at writing soon afterwards. It was at this time that he also developed a sneaking suspicion that the city was not for him and spent as much time as possible exploring remote areas. After school, this led to two formative months spent on expedition in the High Arctic archipelago of Svalbard.

Three years followed reading Biological Anthropology at Cambridge University, most of which was spent staring out of the window, dreaming about colder climates. Obligatory time with serious studying done, Leo returned to Svalbard – Old Norse for “The Cold Edge” – where he lived in a tent for a year training and working as an Arctic guide. During this time, he revisited a novel he had begun at the age of 12 and began reassembling it in the considerable space offered by 24hr darkness. A reluctant return to London to train as a doctor and pursue a career as an army medic followed, during which time he completed his first novel, The Wolf.

Leo currently lives in London, writing, studying medicine and breaking off as often as possible for an adventure somewhere cold and wild.