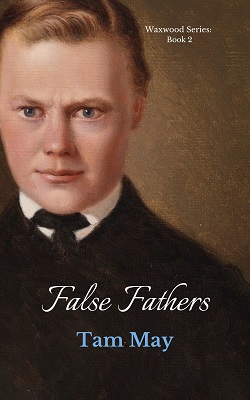 Sometimes no father is better than a false father.

In 1898 California, Jake Alderdice comes of age as a shy and contemplative youth who is passionate about art. On vacation in Waxwood, now a fashionable resort town, he meets Harland Stevens, who takes an interest in the young man’s artistic ambitions. Stevens seizes upon the fatherless young man to counsel him toward a path to manhood inspired by Teddy Roosevelt and Thoreau. He introduces Jake to The Order of Actaeon, a secret society built upon Roosevelt’s ideals of masculine virility and virtue.

But the path to maturity is a complex thing in the Gilded Age. Will his journey free him from the Alderdice family illusions, half-truths, and lies that have kept him a child? Or will it lead him into the world of Actaeon, where the hunter becomes the hunted?

Family expectations hang heavy on Jake Alderdice, raised in late nineteenth century San Francisco by his domineering grandfather he is headed for a career in the family business. This conflicts with his ambition to achieve greatness in his own right as an artist.

Following his grandfather’s death and the expected period of mourning Jake, his mother and his sister move to the resort town of Waxwood for the summer. Here he falls under the influence of Harland Stevens, a charismatic older man with links to a secret society that seeks to promote ‘true’ masculinity.

As the summer draws to a close a dramatic incident will cause Jake to question all that he thought was true about his mentor and himself.

This second instalment in Tam May’s series about the fortunes of the Alderdice family plays on several powerful themes. These include the stories families tell about their origins, the tensions created by rapid progress and what it means to be a man.

May wraps this up in a convincing recreation of the United States as the country began to realise its power and potential at the same time as seeking a purpose. This shadows ideas and insecurities that would be played out over the coming century.

This is historical fiction at its best, May creates a world that is both vastly different from our own and that holds some intriguing similarities. She peoples this with characters who must face the truth about themselves in order to live life on their own terms.

Further instalments taking the story into the twentieth century with all the upheaval that will bring are eagerly anticipated.

Tam May grew up in the United States and earned her B.A. and M.A in English. She worked as an English college instructor and EFL (English as a Foreign Language) teacher before she became a full-time writer. She started writing when she was 14, and writing became her voice. She writes fiction about characters who find their future by exploring their personal past influenced by the time in which they live.

Her first book, a collection of contemporary short stories titled Gnarled Bones And Other Stories, was nominated for a 2017 Summer Indie Book Award. She is currently working on a Gilded Age family saga. The first book, The Specter, is now available, and the second book, False Fathers, is now available for preorder. She is also working on a historical mystery series featuring a turn-of-the-century New Woman sleuth. Both series take place in Northern California.

She lives in Texas but calls San Francisco and the Bay Area “home”. When she’s not writing, she’s reading classic literature and historical fiction, watching classic films, or cooking up awesome vegetarian dishes.