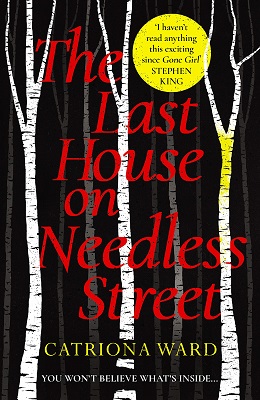 The Last House on Needless Street

All these things are true. And yet some of them are lies.

Told from various viewpoints, including a cat called Olivia, The Last House on Needless Street is a chilling and at times disturbing story of a recluse called Ted who has mental health issues and has periods of time he doesn’t remember.

Ted lives alone in the house on Needless Street, except for his cat and when his daughter Lauren comes to visit. Lauren is like an explosion. She causes so much noise and mess and hates the cat, which in turn hates her too.

We also meet Dee whose younger sister Lulu went missing when she was a child from a day at the lakes. Not long after her disappearance Dee’s mother left and then her father died and so she has been all alone since her teenage years. She is determined to find out who took Lulu and Ted was one of the original suspects, though his house was searched and nothing turned up and he had an alibi, but that won’t stop her delving deeper.

The book has a gothic feel to it. The atmosphere radiates from the pages and the writing draws you into the strange and unusual life of Ted and yet it is so intriguing. I was a little surprised to see chapters from the POV of Ted’s cat at the beginning and didn’t think they would work in a book like this, but I was so wrong. The cat has plenty to say and is very wise.

The plot is very twisty and you have to stay with it. This is a book that is going to be a bit like marmite, you will either love the weirdness and mild horror/gothic thriller feel to it or you will think it is too out there and hate it. All I can say is that it is certainly captivating and the pieces of the puzzle fall into place the more you learn about the characters, though make sure you are paying attention as you just might miss some!

was born in Washington, DC and grew up in the United States, Kenya, Madagascar, Yemen, and Morocco. She read English at St Edmund Hall, Oxford and is a graduate of the Creative Writing MA at the University of East Anglia. Her next gothic thriller, The Last House on Needless Street, will be published March 2021 by Viper (Serpents Tail).

Ward’s second novel, Little Eve (Weidenfeld & Nicolson, 2018) won the 2019 Shirley Jackson Award and the August Derleth Prize for Best Horror Novel at the 2019 British Fantasy Awards, making her the only woman to have won the prize twice, and was a Guardian best book of 2018. Her debut Rawblood (W&N, 2015) won Best Horror Novel at the 2016 British Fantasy Awards, was shortlisted for the Author’s Club Best First Novel Award and a WHSmith Fresh Talent title. Her short stories have appeared in numerous anthologies. She lives in London and Devon.

What did you think of ‘The Last House on Needless Street’? Share your thoughts in the comment section below!