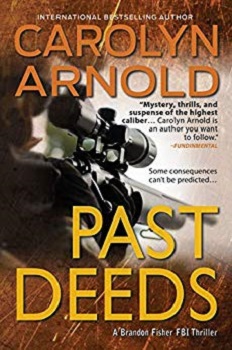 The sun was just coming up, and the sniper’s hands were sweaty as she looked through the rifle’s scope to the streets eight stories below and point eight miles away. In mere minutes, the target would be dead.

A prosecuting attorney is murdered in a sniping that takes place in Arlington, Virginia, less than fifteen minutes from Washington. FBI Agent Brandon Fisher and his team with the Behavioral Analysis Unit are called in to investigate the threat level and to determine if the lawyer was targeted. The FBI hadn’t anticipated previous victims stretching from coast to coast.

The team splits up across the country, but more than jet lag is getting to Brandon. As their profile on the shooter takes shape, their one theory on motive strikes too close to home and has him battling with regret over a past decision. He comes to discover some choices not only haunt us but can have long- and far-reaching repercussions we couldn’t even begin to imagine.

Will Brandon be able to set aside his personal issues for long enough to stop a serial killing spree before there’s another victim?

Past Deeds is book Eight in the Brandon Fisher FBI Series by Carolyn Arnold. I first came across the series back in 2017 with book six, Remnants, and subsequently read book seven, On the Count of Three, in 2018. Both of these books feature gruesome serial killers and they perked my interest. Book eight has the detectives working a different kind of case, a sniper.

The team is first called to Arlington, Virginia to the scene of a sniper attack on prosecuting attorney, Darrell Reid. He was shot dead outside of an apartment block at 6 am, but no-one knows why he was there, especially as he arrived at 11 pm the night before. All those that knew Darrell, including his wife, are staying tight-lipped or hiding behind confidentiality clauses.

Over time it becomes apparent that there have been other sniper targeted shootings in other parts of the country. It is up to the agents including Brandon Fisher, Kelly Marsh, Jack Harper, and Paige Dawson to put the pieces together and work out who and why is someone targeting people and to stop them before more are gunned down.

I have mixed feelings about this book. I enjoy reading about Brandon and his team and how they work. I think Brandon is a great character, sometimes a little hot-headed but he comes across as a capable and realistic FBI agent. However, what I also like about the series is normally how we get to get in the mind of the serial killer and why they do their gruesome acts. This book didn’t have much in the way of interaction with the sniper and nothing was revealed until right at the end.

I also missed the gruesomeness of the killings that have been in the other books, I’m talking people being skinned or decapitated, this one, although, people were still being murdered didn’t have the blood and guts to go with it that I have come accustomed to with this series.

Whilst all the above were a little bit of a let down for me, the writing was once again superb and the accuracy of the handling of the case and FBI procedures was spot on. It was fascinating to see that Ms. Arnold had written the sniper as a female (not a spoiler as it is obvious from the synopsis), I just wish we got to hear more from her.

I do hope that the next in the series goes back to tracking the worst kind of serial killers, Past Deeds was a good read but I like the shocking storylines that normally come with the Brandon Fisher Series.