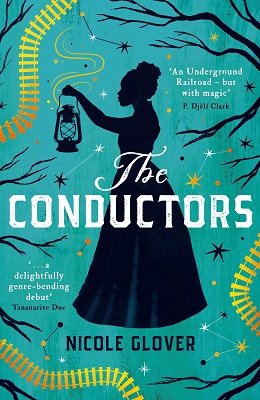 Meet Hetty Rhodes, a former conductor on the Underground Railroad who now uses her magic to solve crimes in her community in a post-Civil War world.

As an escaped slave, Hetty Rhodes helped dozens of people find their own freedom north using her wits and her magic. Now that the Civil War is over, Hetty and her husband, Benjy, still fight for their people by solving the murders and mysteries that the white authorities won’t touch.

When they discover one of their friends brutally murdered in an alley, Hetty and Benjy mourn his loss by setting off to find answers. But the mystery of his death soon brings up more questions, more secrets, more hurt. To solve his death, they will have to not only face the ugly truths about the world but the ones about each other.

“…A story is a living creature, and they need a personal touch to live on. You breathe in your woes, your loves, your troubles, and eventyally they become something new. They aren’t the books you love so much. Stories change with the tellers.” – Hetty (The Conductors by Nicole Glover)

Even as I was reading this book, I knew it was going to be tricky to review. Speculative fiction is one of my favourite thinky genres and always the hardest to put my thoughts into words so you’ve been warned…

The story is about Hetty Rhodes and her husband Benjy. They were conductors on the Underground Railroad, helping people escape slavery before abolition and have now settled in Philadelphia where they investigate crimes in the Black community. When one of their friends turns up dead, they investigate the case and learn a number of uncomfortable truths about their friends and each other.

What makes this speculative fiction is that magic exists in this world – white people use sorcery, which is comparable to industrialism; they use wands and keep the mechanics of the magical system to themselves in order to hoard power, while black people use celestial magic which is equally powerful but more organic and strongly policed so that it doesn’t become too strong.

The author has a beautiful way of telling a story and captures the time period, though the balance between the crime investigation and flashbacks to their time as Conductors did slow the pace down a bit. I loved the use of Celestial magic in this book, it’s not something I’ve come across before – characters can use astrological signs to focus and conjure magic with strong effect.

Hetty is a very practical woman, she puts aside most of her deeper feelings in order to protect the people around her. This is obviously something borne from necessity to get her through life but can make her a less than sympathetic character at times so it’s important to reflect on the reason she is that way.

This book is strong in both the historical fiction and detective genres, I would highly recommend it to fans of either.

According to astrology, I’m a Gemini Sun with a Capricorn Moon, which explains lots of things, but nearly enough. As a lover of obscure trivia, fun facts, and miscellaneous knowledge, I find researching a new book just as fun as writing it.

My psychology degree prepared me both for a writing career and work as a UX Researcher. I am forever disappointed that NASA doesn’t think psychology is a hard science.