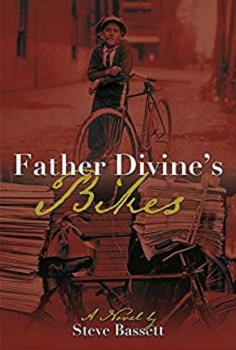 FATHER DIVINE’S BIKES exposes the dark underbelly of 1945 Newark, New Jersey; a city that boomed during World War II but finds itself unable to cope with the peace that brings joblessness, despair and crime. As deeply-entrenched white enclaves are squeezed by the mass migration of blacks, escape routes for poor ethnic whites rapidly close. Two Catholic altar boys living in a world ripe for grifters, like Father Divine, soon learn that his promise of heaven on earth has hellish consequences.

In the autumn of 1945, a battle erupts when the city’s competing mobs end their truce. When it gets bloody, other criminal forces poise to move in. Black bookies, using Father Divine’s controversial International Peace Mission Movement as a front, recruit Joey Bancik and Richie Maxwell to run numbers under the guise of newspaper routes.

The boys’ families welcome the few bucks they can put on the table. Meanwhile, their parish priest and two homicide detectives fear the numbers racket will entrap the boys in a world of crime.

Turf wars, murders, and a corrupt police department in bed with the mob form a dark and gritty backdrop against a story of post-war Newark and the violence that permeated it.

The Biography at the end of this book tells me that Steve Bassett has had a long career as a journalist after being born and raised in the Newark Third Ward. He has put this background to good use.

In Father Divine’s Bikes he gives us a full description of life in that town, particularly for the poor during what was a time of depression following the boom times when they were building weapons, ammunition and other machinery to help win the Second World War. He explains how the area was a mix of immigrant groups including Italians, Germans, Poles, European Jews and Negros from the Deep South. We hear about petty crime, criminal gangs, racial distrust, religious differences and corruption by the Police and by City officials. He also details, no doubt from his own past, the running and distribution of the town’s two major newspapers.

Typically Bassett will introduce a new character then, through their personality, their background and a few little stories, he provides an insightful social history. The downside of this is that there are many characters and whilst their backgrounds are varied and interesting, we learn a lot of information about people who are peripheral to the plot.

Consequently, what story there is, becomes rather drawn out. At 80% of the way through the book I found myself wondering if there would ever be any action. Shortly after that point the plot did liven up but by then there was so little time before it was all over.

But let us return to the positives. The book has an interesting and eye-catching cover although my basic Kindle did not present it at its best. The factual descriptions were fascinating and the fundamental message is the familiar one that the poor will always suffer.

After I had finished the book I discovered that Father Divine (George Baker Jr) and the International Peace Mission were real. My research on that organisation suggests that whilst not everyone would agree with their preaching they were recognised as making positive contributions to poor communities across the USA.

So can I recommend Father Divine’s Bikes? Yes I can, provided you accept that this book is more of an easy-to-read social history than a full blown gangster thriller. I have awarded three and a half stars.

Born and raised in Newark’s crime-ridden Third Ward, although far removed during a career as a multiple award-winning journalist, Steve Bassett has always been the proud sobriquet Jersey Guy. He has been legally blind for almost a decade, but having this hasn’t slowed him down.

Bassett has written two nonfiction books, The Battered Rich and Golden Ghetto: How the Americans and French Fell In and Out of Love During the Cold War. Continuing with his newest fiction release, Father Divine’s Bikes (a Finalist in the 2018 International Book Award in the Cross-Genre Fiction category), readers share in his insights that earned him three Emmys for investigative documentaries, and the California Bar Association’s first Medallion Award for Distinguished Reporting on the Administration of Justice. He now resides in Placitas, New Mexico with his wife, Darlene.