Not every journey takes you far from home.

Baked, mashed, boiled or fried, Mr Doubler knows his potatoes. But the same can’t be said for people. Since he lost his wife, he’s been on his own at Mirth Farm – and that suits Doubler just fine. Crowds are for other people; the only company he needs are his potato plants and his housekeeper, Mrs Millwood, who visits every day.

So when Mrs Millwood is taken ill, it ruins everything – and Mr Doubler begins to worry that he might have lost his way. But could the kindness of strangers be enough to bring him down from the hill?

Mr Doubler is an elderly, proud man who lives alone on his little plot of land at the top of a hill at Mirth Farm. He has lived all alone since his wife died and has been determined never to leave the farm again. To get the things he needs that he can’t grow on the farm he has his housekeeper Mrs Millwood bring them when she comes to clean.

Mr Doubler is a potato connoisseur and loves everything about them. He doesn’t run the biggest potato farm but he sure knows that his potatoes are the best. The biggest potato grower owns the land surrounding his farm, Mr Peele and he wants to buy Mirth Farm. Mr Doubler will never sell and especially not to a man like Peele.

Mr Doubler is happy living on his own, he likes his own company and that of his potatoes. He doesn’t like crowds or many people for that fact. He likes living a simple life and wants to see out his years just as he has been doing for the last few – Alone.

He does have two children who visit now and again, Julian and Camilla. Whilst Camilla wants what’s best for her dad, Julian is very vocal about his father selling the farm and even offers to do all the work for him. Still, Mr Doubler won’t shift.

When Mrs Millwood takes ill, Mr Doubler realises just how much she does for him and not only that, how much he enjoys her company and the little talks they have. He soon begins to realise that he needs to go down his hill and into the village where people are and just maybe he might like what he sees and who he meets.

Mr Doubler Begins Again is an unusual book. I’ve never read a book where potatoes are featured so heavily, this isn’t a bad thing as I love potatoes too. Just like Mr Doubler they can be mashed, boiled, roasted or even fried and I will eat them. The book also taught me a thing or two about potatoes and about cheddar cheese – Go figure!

Mr Doubler is a lovely sweet man who since his wife died has come to enjoy his own company and you get the sense that he may have hidden away from the world to protect himself from others. Getting attached to people and then losing them hurts. Grief can make you want to seek solitude.

The book has so cleverly been written, it’s a bit like a self-help book written in a fictional story as you see the world through the eyes of Mr Doubler and you get to share his journey of re-discovery.

The book was extremely sweet and easy to read and I have to mention the cover as I find it quite elegant. It’s not often I read books featuring an elderly character but the few I have, including this one, have been fascinating to read, heart-warming and so poignant too. I also love the conversations between Mr Doubler and Mrs Millwood, she is such an inspiring lady.

Please don’t be put off by the potatoes or that the book is about an elderly gentleman, but embrace them both and give this book a read. Put simply, this book was a sheer delight to read and I enjoyed every single page.

Novelist, founder and former CEO of The Book People and founder of WeFiFo (“We Find Food”) 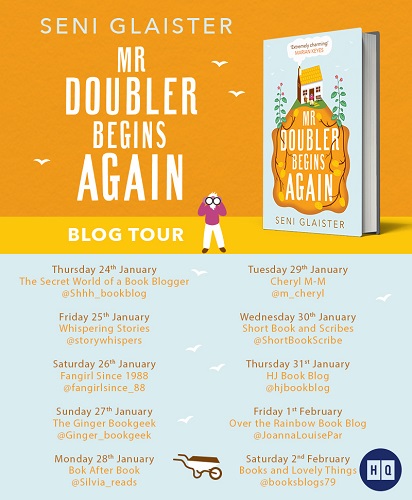