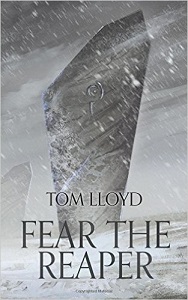 All Shell has ever wanted was a home, a place to belong. But now an angel of the God has tracked her down, intent on using her to hunt the demon that once saved her. The journey will take her into the dead place beyond the borders of the world, there to face her past and witness the coming of a new age.

I’m a huge fan of Tom Lloyd, an author of fantasy novels that explore big ideas (see his ‘The Twilight Reign’ series for more). With Fear the Reaper, a novella, he has taken a different approach but those big ideas are still there, waiting to be expanded, hopefully, at some point down the line.

The story begins with a girl named Shell being rescued with ferocious violence by a mouthless man who is one of The Voiceless Ones. An unknown amount of time later, Shell is coerced into joining a humourless Angel named Ice on a quest to hunt down the Voiceless One which had rescued her from slavers. Joining them is Shell’s would-be suitor Moss, a soldier of the wonderfully named ‘Army of the Rhetoric’.

As I may have mentioned, this is a novella that, like a lot of Tom’s work explores big ideas and grand themes, God’s plan, the world being seen in black and white and all the shades of grey in-between. His prose is rampantly gothic, the language of Shell and Moss coarse but vibrant and it’s up there with some of his very best work. I don’t want to give too much away as dues to its length, every line should be savoured and not spoiled by my clumsy attempts at interpreting Tom’s work.

Fear the Reaper is a novella that you will finish in afternoon with a cup of tea or a glass of wine, but it will leave you wanting more. I hope Tom returns to the world of Ice and Shell because there’s always more stories. 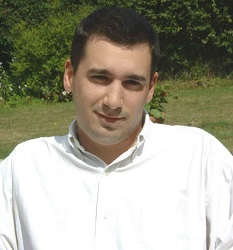 Tom Lloyd was born in 1979 in Berkshire. After a degree in International Relations he went straight into publishing where he still works. He never received the memo about suitable jobs for writers and consequently has never been a kitchen-hand, hospital porter, pigeon hunter, or secret agent.

He lives in Oxford, isn’t one of those authors who gives a damn about the history of the font used in his books and only believes in forms of exercise that allow him to hit something.