Let’s Start Talking About It by Debra Whittam – Guest Post

Let’s Start Talking About It by Debra Whittam – Guest Post

Debra Whittam is a licensed, practicing mental health therapist in Pittsburgh, Pennsylvania, who specializes in addiction, anxiety and depression, grief and loss.

Whittam is passionate about her work in all areas of her specialties, especially addiction. Working in a detox unit for over three years before beginning her own private practice, Whittam realized, while counseling patients in the life and death arena of the detox unit, how much the loss of a beloved through death or a relationship impacted those struggling with addiction.

In this memoir, Whittam skillfully infuses her memories, stories and professional insights to remind us that the most important relationship we will ever have is with ourselves. She splits her time between Pittsburgh, Pennsylvania, the Adirondack Mountains in upstate New York and Paris, France.

Am I Going To Be Okay? Weathering the Storms of Mental Illness, Addiction and Grief is her first book.

I am a first time author so, let’s starting talking about the two questions I am asked most often by nearly everyone concerning my having written a memoir/self help book. “How long did it take you to write the book?” and “Aren’t you worried about what family members will think?” Really? Are these questions that pertain to the author? I think not. What I sense is the people asking are only interested in the answer to see if THEY could do it. So, let’s talk about this.

How long did it take to write? I wrote, on and off, for about three years. The most difficult part was the edit, of course. What I thought was going to be an easy, fairly simple week or two process to get my “shitty first draft”, as Anne LaMott calls it, to a final proof copy actually took six months. Good thing my editor knew how to handle my impatience since she told me we would start going from the first draft to revisions. Well, after the sixth ‘first’ draft I wanted to say ‘I’m done’. But just in the knick of time she announced we were on to the revisions. Ah yes, now we were getting somewhere! After the revisions to the revisions, many times over, we moved on to the changes to the revisions. We were now in month three. Too late to turn back yet I hated the thought of reading one more word of what was once a beloved manuscript to me.

Then, of course, we went from the changes to the changes to the changes. Then finally, my friends, we were at the final manuscript! Yea! What joy. What bliss. At final manuscript 12 I rebelled and said ‘NO!”. This was just in time for the Final Proof copy. The galley or advanced reader copy as it’s called. Great. After three final proof copies we have now officially gone to print! Oh my gosh. How do people do this for a living?!

So, do you see how my answering, to the unknowing questioner, it took three years to write the book leaves me weak in the knees. It’s not about me or what I went through, for heavens sake (!), it’s about them. Of course it is.

Question number two is more lengthy to explain however, equally uninteresting to the one with the query. Are they still listening as I explain that my first writing workshop was with Carol Henderson in Little Switzerland, NC where she explained to any of us thinking about writing creative non-fiction, memoir, to write as though everyone in the story has already died. Or don’t do it at all. That was a heady first bit of information for me as I already was sure I was the only who did not belong at the workshop. I’m was a pretend ‘wanna be’ writer while everyone else was serious about it, better at it, etc. However, through the next three years of writing, I kept that thought firmly in the fore front of my mind as I traveled the road of writing; what I remembered, my perception of the things I saw, heard and how I was treated from littlehood onward.

Is there any possibility that a family member will agree with my experience being true for them? If, as they say, accuracy is based on perception, then every sibling in the same car having the same horrifying experience of riding with our drunk father at high rates of speed will invariably not have the same or even similar experiences as I did.

We all have our own examples of being at the same dining room table with all the siblings and have a different narrative of what happened when someone spilled milk, triggering a major brawl which in turn lead to yelling, crying and sometimes people coming to blows.

So do I answer to these random people, who I don’t even know, “Well, I can’t go to each person to make sure they are okay with it because blah blah blah.” The person is already not listening. No sibling, aunt, uncle, cousin would agree with what I had as my experience. Parents would, absolutely, not agree. So who ends up being the crazy one here? And, how does anyone begin and end writing their memoir/ creative non-fiction narrative if they are, indeed, a Pleaser.

Was and am I concerned with telling family stories that were always meant to be kept secret? The point of my book is to see how insane it is to NOT talk about family member’s mental illness, their addictions and the loss of a beloved through death or a relationship. The impact on everyone in the family, especially the little ones watching the adults act like little monsters, is what creates the beginnings of chronic ‘IV drip’ of anxieties where little ones are sure of one of two things. Either they did something wrong or there’s something wrong with them. Those are the choices. Silence and denial run the show and eventually become deadly in one form or another.

So, my dear person with the questions, yes I considered everyone in the story. Alive and not alive. My experience is my truth. If someone could have been in my shoes, at the same time with the same experience there might be a chance for some convergence of truth. Doubt it, but maybe. This memoir is a story of my life with my mom, entire family, but mainly her from my birth until her death interwoven with the untreated mental illness, untreated addiction and unacknowledged grief that flows through everyone’s family tree. We just don’t talk about it. Any of it. Until, of course, on someone’s death bed they sob out some essential bit of information that would’ve made everyone’s life different had they known it was NOT their fault. Whatever ‘it’ is.

Answering these lame questions will become habit down the road and I will say, “Three years and yes I considered everyone.” Let’s keep talking about it. 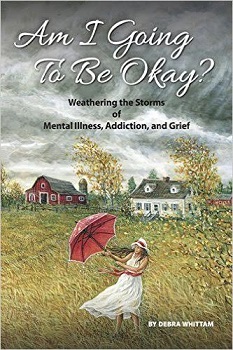 Am I Going To Be Okay? is an American story with a universal message. Ms. Whittam traces her history in the form of stories about her all too human, and sometimes unhinged family; she throws a rope to the little girl living there, and in adulthood, is able to pull her out to safety, bit by bit.

Her history is peopled with folks from a different time, a time before therapy was acceptable, 12 steps unimaginable and harsh words, backhands and even harsher silences can be spun to appear almost normal. She writes of a mother who would not or could not initiate love nor give it without condition, and a father, damn near heroic at times, abusive at others, a survivor with his head down and his sleeves rolled up.

Ms. Whittam approaches her past with the clear-eyed tough but sensitive objectivity necessary to untangle the shame from the source. She speaks of the people that affected her life so deeply with an understanding of their time and place in American culture; a family not far removed from immigrant roots when men carried their own water, emoted misplaced anger, and with fresh socks and food found on the trail, were confident, unflinching and at that same time tragical- ly failing to the little ones they ignored.

Like many of us, details notwithstanding, Whittam responded by numbing, running and gunning. Alcohol gave her hope, soothed a crushed soul for a time and wrecked her on a train, until finally she had the courage to accept it wasn’t working for her anymore. It was time to stop drinking and take inventory and accountability. It was time to accept, forgive and move forward. She healed where she was broken.

It is in the telling of this story that Whittam teaches us the difference between just surviving and surviving well, the importance of shared introspection and a careful eye on the wake we leave behind in our actions. Her story is a guide to surviving abuse and addiction. It is also about witnessing and dealing with the shrinking faculties of aging parents in the unavoidable circle of life. Finally, she offers a realistic sense of hope, forgiveness and a life we can shake hands with.