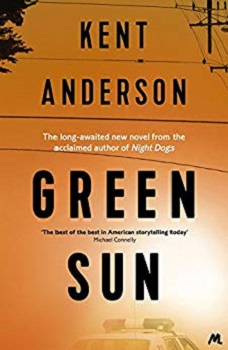 The acclaimed author of Night Dogs and Sympathy for the Devil returns with a blistering new novel – his first in over 20 years.

Hanson thought he had witnessed the worst of humanity after a tour of duty in Vietnam and a stint as a cop in Oregon. Then he moves to Oakland, California to join the under-funded, understaffed police department.

Hanson chooses to live – alone – in the precinct that he patrols; he, unlike the rest of the white officers, takes seriously his duty to serve and protect the black community of East Oakland.

He will encounter prejudice and hate on both sides of the line… and struggle to keep true to himself against powerful opposition and personal danger.

Green Sun is a raw, unflinching novel about America’s divided cities and one man’s divided soul.

Green Sun is the third novel by Kent Anderson to feature Hanson (we are not given a first name) and what a great character he is. Physically strong, brave and fearless he patrols the tougher streets of Oakland alone in his police car, usually working nights. He is very much a loner who does not relate to his colleagues. He has no friends or family and struggles with demons from his time in Vietnam.

One reason that Hanson’s character is so convincing is because his background is almost identical to that of the author. I only hope that the author does not suffer in the same way from his own memories of that war.

Most of the action relates to the various incidents that Hanson attends which are accompanied by a few ongoing threads of an overall story. That lack of a plot does not disadvantage the tale in any way because the smaller stories are fascinating and Anderson creates such tension and atmosphere that you have to keep turning the pages.

Interspersed with the incidents are dreams and recollections of Hanson’s time in Vietnam which were clearly harrowing. Having somehow managed to cheat death in the Vietnam conflict Hanson has little concern for his own safety which explains the fearless way that he copes with his demanding role.

The support characters of Felix, Levon, Tyree, Weegee and Libya will all capture your imagination, regardless of any initial judgements you may make on their various lifestyles.

Given Anderson’s masterful writing talent I was a little surprised to see that he has only published four novels in a period spanning over thirty years. For the sake of his readers and for his future readers, I hope that the success of Green Sun will inspire him to produce more of the same in the near future.

Green Sun will hold your attention and it will provoke your thoughts. I have awarded four stars.

Kent Anderson is a U.S. Special Forces veteran who served in Vietnam and a former police officer in Portland, Oregon, and Oakland, California. With an MFA in creative writing from the University of Montana, he has taught college-level English and written screenplays.

His two previous novels, Sympathy for the Devil and the New York Times Notable Book Night Dogs, both feature Hanson. Anderson may be the only person in U.S. history to have won two NEA grants for creative writing as well as two Bronze Stars. He lives in New Mexico.