The Hunting Ground by Will Shindler – Book Review

The Hunting Ground by Will Shindler – Book Review 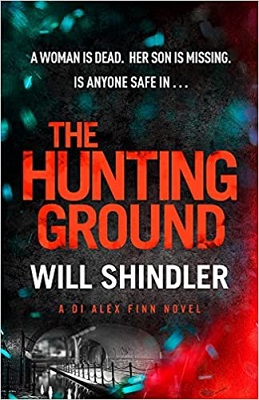 Sadie Nicholls has been found dead, brutally and strangely murdered, in her South East London flat. Her little boy is missing.

DI Alex Finn and DC Mattie Paulsen know that, in the case of a missing child, it’s the first 24 hours that count. They don’t have many left to find out where Sadie’s son might be and the identity of her killer. Why would anyone want a struggling single mother, loved by many, dead?

But when they realise a similar crime was committed at the same house nearly 20 years ago, a question is on everyone’s lips: is this more than just a coincidence?

The Hunting Ground is the third book in the DI Finn series from author Will Shindler, with The Burning Men being book one and The Killing Choice being book two. The books it would seem are one per year and I would say they each could be read as standalones too.

In book three a young mother returns home early from waitressing at a black-tie event that got a little too hands-on. Not long after getting home, she is murdered as she opens her front door. Her young son is either taken by the killer or wandered off afterward. DI Finn and his team are facing a race against time to find out what happened and to locate the child.

From the opening scene to the last the book is gripping. I enjoyed the build-up to the case and the investigation to get justice for Sadie, the young mother. Once it was brought to light that another murder had occurred 20 years previously and was similar in circumstances, I had worked out who the killer was but what else happened completely took me by surprise. This is what I love about this author’s work. He throws in a few red herrings and keeps the plot twisty.

The Hunting Ground will have you frothing at the mouth, especially at the way those men with money think they can manhandle a woman. It will also keep you entertained and on the edge of your seat. It is an amazing read. So grab yourself a copy and settle down, ready to be taken through a roller-coaster of emotions. This is a series that just keeps on giving and getting better with each book.