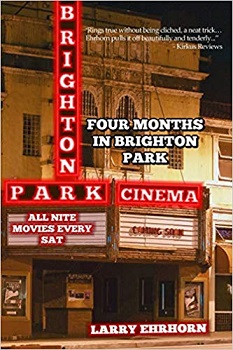 Set in a working class neighborhood on Chicago’s southwest side in 1965, “Four Months in Brighton Park” focuses on Kelly Elliott, the kid with two first names. Kelly is a cross between Holden Caulfield and Walter Mitty, rarely facing reality until one day when he is forced to confront the consequences of his actions, when he impulsively makes an obscene gesture at Joe Swedarsky, the school jock and bully.

That initial conflict starts a cascade of humorous and affecting dominoes that change his life. Being raised by his single, hard-working mother, Kelly stumbles through misadventures — dealing with his mother’s tyrannical pilot boyfriend, peer pressure, male curiosities, teachers, and friendships. Besides Ma, his guides through this journey include Little Joey, the legless owner of a local deli; best friend Jerry Hogan, Mary Harker, a troubled, mature woman; and Linda Martinsen, the quiet girl who found something likable in Kelly.

The four month journey taken by Kelly provides insight, change, humor and empathy, elements of which all people are familiar.

The novel follows teenage boy Kelly as he finishes high school in Chicago in the 1960s. Kelly struggles with a bully, dating, living with his single mother, and growing up. It begins as a typical coming-of-age story would – with Kelly focused on teenage problems, but soon Kelly’s issues are overshadowed by his emergence into adult life.

The story is framed in a retrospective first person, though we don’t know the age of the older Kelly. This adds a layer of complexity which I appreciated. We are given Kelly’s teenage perspective as well as some asides about why his views are a product of the time. For example, he generally follows any problematic jokes/observations with comments of how attitudes about sex and gender have progressed since that time. As such, this softens dated opinions into a deliberate portrait of social norms from over fifty years ago.

Is it very much a nostalgia piece – the novel is replete with 1960s references, many of which are either obscure or very specific. Having been born 20 years after this novel is set, I found it distracting in their frequency, as I picked up on maybe two out of ten. These appear less often as the story moves forward, but they are overused in the first few chapters.

Unfortunately, there are times when the story wavers between providing too much description and not enough. Kelly’s character is hard to nail down the first few chapters, as he performs an action, but then the narrator comments that this is out of character for him. This creates an unreliable narrator for the first half, but by the second Kelly’s personality becomes more defined. We grow to like and empathize with Kelly as he grows up.

There is a decent cast of secondary characters, from Kelly’s mother, her boyfriend, Kelly’s best friend, an older acquaintance, and Kelly’s love interest. Kelly’s mother is shown to be hard-working and resilient, and there are sad parallels in her life towards a woman Kelly befriends. A major focus of the novel is Kelly’s sexual interests, which matures as events unfold.

The novel does a wonderful job showing teenage confusion around sex. There aren’t any references to any political or race issues that were on the rise at the time, but gender-specific violence and poverty are major themes.

Overall, it is an easy-to-read, entertaining, period-piece with bits of humour and emotional resonance. While the novels appears to be intended towards an older audience, Kelly’s life is still relatable to young people as well.

Larry Ehrhorn was born in 1947 in Chicago, the scene of the book Four Months in Brighton Park. After short stays in Oak Park, Elmhurst and Wheaton he went to Northern Illinois University, in Dekalb, Illinois from 1965-1970, majoring in theatre arts, and minoring in English. Of course, it was mulch easier to get a job teaching English than in theatre, so he was pretty much forced to accept a job in Blanchardvile, Wisconsin.

The next 27 years flew by, as he married Becky (after eloping to Copenhagen, Denmark), buried four dogs, and bought two houses (one at a time), and gave birth to a son. Actually, Becky did that part. It was a good 33 years total, during which he learned more and more about teenage psyche, and he started to write his book, which took him 30 years total, while right in front of him, he was watching some of his future characters trying to answer tests questions. Sounds like fun. Loves writing and is currently at work on his second book, what he calls his “dog book.” He and Becky have traveled extensively, including touching ground on all seven continents and learning the meaning and joy of grandfather.