By the Hands of Men: Charlotte Through the Ocean of Fire by Roy M Griffis – Book Review

By the Hands of Men: Charlotte Through the Ocean of Fire by Roy M Griffis – Book Review 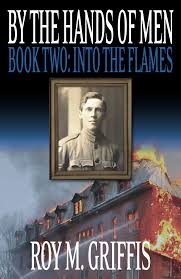 Charlotte Braninov, traumatized by loss and her service as a frontline nurse, returns to war-torn Russia to find her family. Captured by the Red Army, she exchanges one hell for another.

Her still-loyal Lieutenant, Robert Fitzgerald, believing the woman he loves is dead, struggles to recover from the ravages of combat and typhus. In a desperate bid to rediscover himself, he commits to serve his country as a pawn in distant Shanghai.

Forging their destinies in a world reeling after The Great War, Charlotte and Robert will learn anew the horror and the beauty the hands of men can create when they descend into the flames.

‘Charlotte Through the Ocean of Fire’ is the second book in the ‘By the Hands of Men’ series and picks up the story where the first book ends. I had the pleasure of reviewing Griffis’ previous work and therefore expected much from the sequel.

The cover design sticks faithfully to the graphical format of the first novel, this time with a portrait of a soldier against a backdrop of events of the time.

Initially I was absorbed by the developing story of Charlotte as she travelled through Europe to reach her homeland of Russia. By contrast, the parallel story of Robert Fitzgerald was more protracted and caused the momentum to sag a little.

The author displayed an admirable geographical knowledge of London streets but then rather let the side down by allowing British characters to use American-English terms such as; ‘fall’, ‘sidewalk’ and ‘railroads’. Also I would question the slightly liberal use of the appellations ‘Lord’ and ‘Lady’. However, whilst those small points may well irritate some British readers, they will be largely irrelevant to a wider audience.

As with the first novel, this work is well-written with thought-provoking descriptive passages and a skillful use of literary devices. I again commend the author for doing his historical homework and tackling a complex period of history.

For me, this novel is a victim of its own success. I became totally wrapped up in Charlotte’s story and had the book concentrated on her alone, I could have found no reason to award anything less than five stars. However, try as I might, I just couldn’t engage with the same enthusiasm in Robert’s oriental adventure.

I’ve no doubt the author put his heart into the entire work with equal measure but the themes of Charlotte’s fight for survival in her homeland and Robert’s service to King and Country in China, didn’t really impact equally, making the end result rather unbalanced.

Undoubtedly it was hugely advantageous to have read the first book in the series, as this novel would struggle to stand alone in spite of the reader being drip-fed some backstory. It was necessary to know the main protagonists’ shared history to understand why this book contained two separate storylines.

In spite of my observations, this was an enjoyable read and I look forward to finding out what happens next. If you are a fan of this genre, I recommend this work as a follow on from the first book and award ‘By The Hands of Men: Charlotte Through the Ocean of Fire’ four stars.

Since then, I’ve never looked back. I’ve written poems, short stories (twice runner-up in the Playboy college fiction contest), plays (winning some regional awards back East and a collegiate Historical Play-writing Award), and screenplays. I’m a member of the WGAw, with one unproduced screenplay sold to Fox Television. Along the way, I’ve done the usual starving artist jobs. Been a janitor, a waiter, a clerk in a bookstore. I was the 61st Aviation Rescue Swimmer in the Coast Guard (all that Tarzan reading wasn’t wasted). I’m also not a bad cook, come to think of it. Currently, I’m a husband, father, and cat-owner. I’m an avid bicyclist and former EMT.