Today on the blog we welcome author Rachel J Bonner, with her Writing Tip ‘How I Come Up With My Characters Names‘, as part of the blog tour for her new book, ‘Cloth of Grace’ which was released on 29th February 2020. This post contains affiliate links. 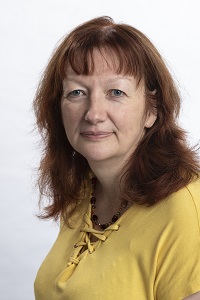 Rachel J Bonner is the author of the compelling and enthralling four book Choices and Consequences series. The first book in the series, Strand of Faith, was published in November 2018. Book 2, Thread of Hope, released on 2nd May 2019, followed by Weave of Love on 24th October, and Cloth of Grace at the end of February 2020.

Getting a degree in engineering, followed by a career in accountancy is probably not a conventional path to becoming an author, particularly in fantasy or romance. Rachel says that, although accountancy isn’t anything like as boring as everyone thinks, writing is a lot more fun.

When not writing, she can be found walking in the beautiful countryside near where she lives, which has influenced much of the scenery in her books, or shooting things with her local archery club. Shooting targets only, honest. Nothing to worry about. (Okay, sometimes we shoot Polo mints. Or cabbages. Still nothing to worry about.)

You can find out more about her books by visiting the accounts below or by signing up for Rachel’s newsletters at – www.subscribepage.com/webpage.

How I Come Up With My Characters Names

One of the questions authors get asked a lot is ‘where do you get the names for your characters?’

For me, the names of the main characters just appeared in my head with the key characters. To start with I just gave the minor characters ‘placeholder’ names but then I found those stuck and I couldn’t change them. Now, for every new character I think about what name would suit them, and try not to make the name too similar to one I’ve used before. If necessary, I scan baby name lists to get ideas.

When there’s a limited range of first names in use, we turn to second names or family names to distinguish people and these help a little. But anyone who has researched their family tree will tell you once you find Brown, or Smith, or Jones in your ancestors, working out who is the right one becomes very hard indeed. If that’s you, I have three of the twelve most popular English surnames in my four grandparents so I feel your pain. And if you are trying to trace the female line in many cultures it becomes even harder because the female will take on a different family name on marriage.

Indeed, should a woman marry and divorce, maybe more than once, she could have several different names during her lifetime. A man is still far more likely just to have one name and for his family name to be carried by his children. Of course, there are a number of people doing this differently today, and cultures who do this differently too. Children might be given both their parents family names as a double barrelled name (although I’ve often wondered what happens when they have children with someone with a double barrelled name…). Sometimes girl children are given their mother’s family name and boy children their father’s. Some couples create a new family name for their partnership.

What we consider surnames have a fascinating history too. They might have come from where someone lived such as Wood, Forest or Green, from what they did such as Baker, Wright or Smith, from a personal characteristic like Long or White or from their father’s name – Johnson, Roberts, Williams – which is where most of the commonest English surnames fit. In Iceland, historic surnames have been illegal since 1925 (with a few exceptions). Instead, they use patronymics. Children take their father’s name with the addition of ‘son’ or ‘daughter’. So Magnus’s son Fred would be Fred Magnusson, and Fred’s son Jack would be Jack Fredson.

In the world in which the Choices and Consequences series is set, people take their second name from where they have pledged their loyalty, so both men and women will change their name if their allegiance changes. If they pledge directly to a Great House, they’ll take the name of that Great House. If they pledge to a High House, or a Low House, they’ll take the name of that House, rather than the Great House that those Houses are pledged to. Children will take their mother’s allegiance until they are old enough to make their own choices.

As an example (there may be spoilers if you haven’t read the earlier books), Perry’s (aka Prospero) parents are Lords of Deepriver High House. So Perry’s childhood family name was Deepriver. When his Uncle, High Lord of Great House Tennant chose him as a possible heir, his family name changed to Tennant. It remained Tennant while he was just a student at Great House St Peter but when he became a monk his full name became Prospero St Peter. When he left the monastery he reverted to Prospero Tennant, but his name is going to change again and his next name will depend upon where he and Leonie chose to pledge their allegiance. You’ll have to read Cloth of Grace to find out the answer to that.

To any genealogists who would prefer people to have the same name from birth to death, I apologise for my world building. I know I’ve let the side down here. But at least you can use someone’s name to work out where you need to go to look at the records…

When the fate of the world rests on your shoulders, how do you choose between what you ought to do and the only thing you really want?

Leonie finally knows who she is. But now she needs to decide who she is going to be. Her choice will affect not just her family, not just those she knows, but tens, hundreds of thousands, millions of people that she doesn’t. And every path that’s open to her will put Perry under the pressures that caused his breakdown before. How can she do what she must and still protect Perry?

Perry desperately wants to make things easier for Leonie. Somehow he has to find the strength to face the things that all but destroyed him in the past. But every way he turns, some aspect of his past lies waiting to pounce – even during his happiest moments. And he can never forget that Leonie’s life is in danger from someone, somewhere.

Gabriel has managed to negotiate peace, at least in theory. Now he must put that into practice and reunite Leonie with the family she never knew she had. Then disaster strikes right in the middle of his own sanctuary. Can he still protect those he loves, or has he been harbouring a villain the whole time?