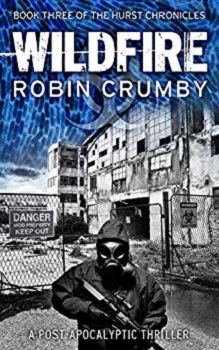 In the aftermath of a devastating flu pandemic, a military-led relief effort is evacuating UK survivors to a mass quarantine zone on the Isle of Wight. In the political and moral vacuum that follows, refugees trade their freedom for food and a fresh start.

Riley and the others from Hurst Castle have relocated to a hotel on the clifftops of Freshwater Bay. To keep her promise she must leave the relative safety of their new home in search of Zed’s daughter on the other side of the island, witnessing first-hand the at-times brutal repression of the civilian population.

Colonel Abrahams’ investigation into the causes of the pandemic leads Zed back to the bio-weapons research facility at Porton Down to interview Ephesus, the archivist with detailed knowledge of Porton’s century-long experiments with chemical and biological agents.

After her kidnap from Osborne House, Terra remains embedded with Briggs and the rebel group, helpless to stop their attempts to disrupt Allied reconstruction efforts. As more locals rally to the rebel cause, the prospect of civil war seems unavoidable.

If, like me, you have enjoyed the first two books in the Hurst Chronicles you will welcome Wildfire which continues the story in very much the same manner as before. Once again we are following the same group of characters including Riley, Zed and Terra with the perspective moving between them as they play their various roles in the development of the Isle of Wight as a virus free zone.

Alongside the story of this “brave new world” we have Zed’s involvement in the trip back to Porton Down which gave an insight into such viruses, how they mutate and how their spread can or cannot be avoided. This was made all the more poignant for me because as I read Wildfire, the new Coronavirus strain reached the UK. I hope that by the time you read this, Covid-19 will have shown itself to be nothing worse than a strong influenza virus and nothing to compare with Robin Crumby’s Millennial Virus.

If you are new to this series you may find it easier to read book one, Hurst and book two, Sentinel beforehand because I am not sure that Wildfire stands alone.

I read books on a black and white Kindle so I rarely notice the covers but Wildfire’s cover is a stark image of how life could be in a post-apocalyptic UK.

There were a few items of interest along the way. The name Influenza is derived from the Italian term influenza di freddo meaning influence of the cold. Also, was I confused or did Gill Forrester become Gill Stephens?

I am sure this is not the end of the Hurst Chronicles series. Wildfire ends with more loose ends than one more volume could handle but as we are potentially reading about the future of life as we know it, the storylines are, we hope, limitless. I have awarded Wildfire four stars.

Robin Crumby is the author of The Hurst Chronicles, a post-apocalyptic series set on the south coast of England in the aftermath of a flu pandemic. Since reading John Wyndham’s Day of the Triffids as a child, Robin became fascinated by end of the world dystopian literature and was inspired to start writing by Cormac McCarthy’s ‘The Road’ and Emily St. John Mandel’s ‘Station Eleven’. Why? Because post-apocalyptic fiction fires the imagination like nothing else. Pondering what comes next, who would survive, what would life look like?

Much of the best fiction in this popular genre focuses on brain-eating zombies or events unfolding in the USA so Robin determined to write a story set in the UK. His Eureka moment came wandering the shingle beach at Milford-on-sea, inspired by the beauty and rich history of the Solent. Where better to survive the end of the world than a medieval castle surrounded by water?

Robin spent much of his childhood messing about in boats, exploring the many waterways, ports and military forts of the Isle of Wight, where The Hurst Chronicles are set.