I Dare You by Sam Carrington – Book Review

I Dare You by Sam Carrington – Book Review 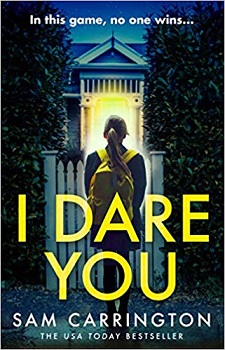 AN INNOCENT GAME. A SHOCKING CRIME. A COMMUNITY FULL OF SECRETS.

Two little girls were out playing a game of dares. Only one returned home.

The ten-year-old told police what she saw: village loner Bill ‘Creepy’ Cawley dragged her friend into his truck and disappeared. No body was found, but her testimony sent Cawley to prison for murder. An open and shut case, the right man behind bars. The village could sleep safe once again.

Anna thought she had left Mapledon and her nightmares behind but a distraught phone call brings her back to face her past. 30 years ago, someone lied. 30 years ago, the man convicted wasn’t the only guilty party. Now he’s out of prison and looking for revenge. The question is, who will he start with?

1989 – Ten-year-old’s Jonie and Bella enjoyed playing the game ‘Knock, Knock, Ginger’ (we called it knock-a-door-run). The girls dare each other to knock on the doors of the residents of Mapledon. One house neither of the girls wanted to knock on was Billy ‘Creepy’ Cawley’s bungalow, however, if you have been dared to do it, you must!

July 1989, Jonie Hayes went missing. Despite no physical evidence and no body ever being found, Billy ‘Creepy’ Cawley was convicted of her murder and sentenced to thirty years in prison after her friend testified that she had seen Jonie getting into Billy’s pick-up truck.

July 2019 – Billy has just been released from prison and he’s looking for revenge. Anna (Bella) hasn’t been back to Mapledon in over twenty-years but when her mother calls distressed that someone has nailed a dolls head to her front door, Anna returns to the place she swore she would never step foot in again.

Freelance Journalist Lizzie heads to Mapledon to cover the story of Billy’s release, but she may be there under false pretences.

What started as an innocent game thirty-years-ago has everyone on tenterhooks waiting for what will happen next.

I Dare You is a psychological thriller that truly plays with your mind. The book is told in the third person and from the points of view of Anna, Lizzie, and the events in 1989. The book is filled with twists and turns and a few red-herrings too.

The chapters are short which seems to heighten the tension and kept me on edge. I especially loved the chapters set in 1989 as they helped to bring the story together. I also found myself trying to figure out what Lizzie’s connection to Mapledon and the murder case was.

This is the first book I have read by Sam Carrington and I can tell you that the writing is superb. The way that she describes a scene has you perfectly able to visualise what is happening and she painted the village of Mapledon as this weird, strange town where secrets were behind every door.

The conclusion was satisfying and I was left feeling that all my questions had been answered. It might not have been a big climactic ending but it fitted the story perfectly.

Sam Carrington lives in Devon with her husband, two border terriers and a cat. She has three adult children and a new grandson! She worked for the NHS for fifteen years, during which time she qualified as a nurse. Following the completion of a psychology degree she went to work for the prison service as an Offending Behaviour Programme Facilitator. Her experiences within this field inspired her writing.

She left the service to spend time with her family and to follow her dream of being a novelist. SAVING SOPHIE, her debut psychological thriller, published in September 2016. It became a Kindle eBook bestseller, with the paperback hitting The Bookseller Heatseeker chart at #8. Sam was named an Amazon Rising Star of 2016.

Her second psychological thriller, BAD SISTER, published in 2017 followed by ONE LITTLE LIE in July 2018. THE MISSING WIFE publishes in June 2019 with her fifth, I Dare You published on 12th December.