Let Us Be True by Alex Christofi – Book Review

Let Us Be True by Alex Christofi – Book Review 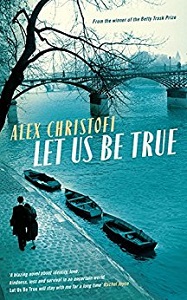 Let Us Be True

Ralf is alone, filling his days with glasses of red wine at Jacques’ bar, waiting for life to happen to him. Then, one night, Elsa – bold, enigmatic, unpredictable – whirls into Jacques’ bar and into Ralf’s world, knocking him out of his cautious routine and into a life full of spontaneity and excitement.

But Elsa is hiding something. As Ralf falls deeper in love, he reveals more of his past – his childhood in Nazi Germany, his time in a British tank division at the end of the Second World War. But what is Elsa hiding? And can their love survive it?

Let Us Be True charts the lives of these two extraordinary characters through an era of great uncertainty, from the war and its aftermath through to the deadly unrest of 1960s Paris.

Evocative, charismatic and sweeping in scope, Alex Christofi’s second novel is a moving story of love and loss, of the things we hide from ourselves and from others, and of the personal cost of Europe’s turbulent twentieth century.

‘Let Us Be True’ is the second novel by British based best-selling author, Alex Christofi. The tale is told in the third person from the perspectives of our main protagonists, Ralf and Elsa. The book is divided into three parts with the action taking place between 1958 and 1992.

Ralf and Elsa are both German-born and meet in Paris in 1958. Their wartime experiences have had a profound effect on them both. Ralf ended up in England and Elsa, in France. As well as coming to terms with their own demons, they have to adjust to a post-war reality of great upheaval and social change. Previously accepted dynamics, norms and values are continually challenged with many displaced people across Europe trying to find a place to call home. Ralf and Elsa’s relationship is short but meaningful as their lives collide for brief moment in time.

I enjoyed Ralf’s backstory from his arrival in England to his time serving with the British Army. This was fleshed out to some extent with the introduction of Ralf’s father and the flashback passages which covered the Weimar Republic years in Germany.

Ralf is without doubt a lost, searching soul and Elsa has an enigmatic, detached quality. I desperately wanted to like her but feel I did no more than scratch the surface of her personality. I fared slightly better in the second part when we moved from Ralf to witness some events from Elsa’s perspective, growing up under the Nazi regime away from her family, which would go some way to explaining her character.

I found rating this story extremely hard. I thought the concept was brave, imaginative and very evocative. For the quality of the descriptive prose alone, it was a five star book all the way. The author gave the characters some amazing material to work with but sadly for me, they somehow never quite fulfilled their potential. I found some of their dialogue a little awkward and try as I might, I just didn’t feel the chemistry between them.

Nonetheless, I appreciate the huge amount of research and sensitivity that has gone into the turbulent Paris backdrop of the fifties. I am sorry that I could not fully engage with this tale but suspect that others will find layers that I missed and objectively therefore, award four stars.

Alex Christofi was born in Dorset and read English at Oxford University. As well as working as an editor, he writes occasional essays and reviews. His first novel Glass, also published by Serpent’s Tail, was longlisted for the Desmond Elliott Prize and won the Betty Trask Prize.