LAUREN IS CRYING.
LAUREN IS EXHAUSTED.

Behind the hospital curtain, someone is waiting . . .

Lauren is alone on the maternity ward with her new-born twins when a terrifying encounter in the middle of the night leaves her convinced someone is trying to steal her children. Lauren, desperate with fear, locks herself and her sons in the bathroom until the police arrive to investigate.

When DS Joanna Harper picks up the list of overnight incidents that have been reported, she expects the usual calls from drunks and wrong numbers. But then a report of an attempted abduction catches her eye. The only thing is that it was flagged as a false alarm just fifteen minutes later.

Harper’s superior officer tells her there’s no case here, but Harper can’t let it go so she visits the hospital anyway. There’s nothing on the CCTV. No one believes this woman was ever there. And yet, Lauren claims that she keeps seeing the woman and that her babies are in danger, and soon Harper is sucked into Lauren’s spiral of fear. But how far will they go to save children who may not even be in danger?

Lauren has just given birth to her baby boy twins, Morgan and Riley. One night whilst she is in the hospital bay on the maternity ward she believes a woman has been brought in to the bed next to her, but the curtain is shut and so she can’t see her. However, she can hear her talking. The next morning there is no-one in the bed next to her and the staff tells Lauren that there never was.

The next night, Lauren again hears the woman, this time she is singing a creepy song and after a few verses Lauren has had enough and opens the curtain to ask the woman to be quiet, however she is shocked when the woman tells Lauren that she wants to swap one of her twins for one of Lauren’s and if she doesn’t do it she will take both of Lauren’s. Lauren is clearly shaken by the woman and picks up her children and heads to the bathroom locking herself in and calling the police.

The hospital security reaches Lauren first and cancels the call as there is no woman in the bay and Lauren is the only mother on the ward with twins. A psychiatric doctor is called who believe that Lauren is having some kind of psychotic episode.

DS Joanna Harper visits Lauren to find out what happened and to take a look at the CCTV which doesn’t show a woman on the ward but does show some kind of strange flashes on the floor. Lauren is petrified that someone wants her babies and it would seem that DS Harper might be the only person to believe her, but what is actually going on. Is there really a stranger after Lauren’s children, is there something paranormal occurring or is everything really in Lauren’s mind?

This is one of those books that you start to believe you have everything figured out about what is happening and then you are led down another road that makes you change your mind, nothing is clear cut and there are plenty of twists in the tale to keep you on your toes.

The characters are very believable. You have Lauren who has just given birth to twins and is feeling happy and anxious at the same time. Her husband Patrick who is struggling to understand what is happening to his wife as he can’t see any woman trying to take his children. There is also DS Joanne Harper who is a bit of a loose cannon on the force. She doesn’t always play by the rules as she tends to follow her gut, even if it gets her into trouble. Her gut is normally right too.

The book has been cleverly written and was really addictive. I actually read it in two sittings as I didn’t want to put it down. I can’t say that they book creeped me out or had me on edge but there is definitely a darkness to the book and the sense that something sinister is always around the corner.

This is a superb read that had a nice pace to it and the short chapters helped to keep it moving along steadily. I also loved the little quotes and passages at the start of each of the chapters and the folklore aspect too. I was engrossed in trying to figure out what was happening and how we would end up where the prologue begins. I can honestly say that the book might not have given me goosebumps but it certainly kept me entertained.

Melanie Golding has been employed in many occupations including farm hand, factory worker, childminder and music teacher. Throughout all this, because and in spite of it, there was always the writing.

Her first novel, Little Darlings, was published by HQ in the UK in May 2019, and by HarperCollins Canada and Crooked Lane Books US. Little Darlings has been optioned for screen by Free Range Films, the team behind the adaptation of My Cousin Rachel. 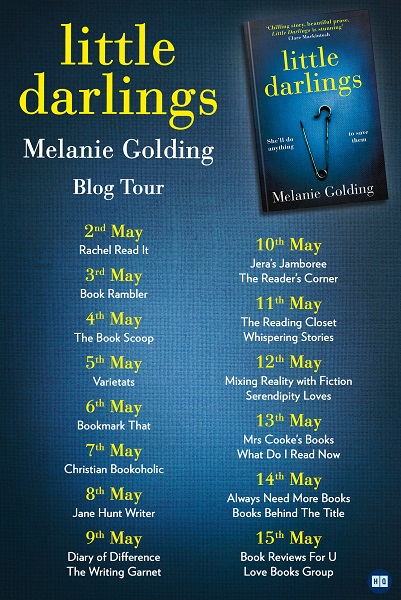