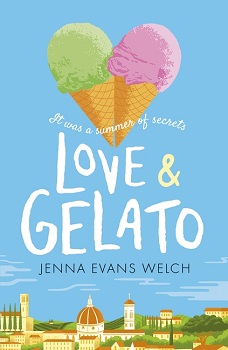 The dying wish of 16-year-old Lina’s mother was for her daughter to live in Tuscany and get to know her father, whom Lina has never met. “Howard is the best man I’ve ever known,” her mother says, “he’ll keep you safe.” Why did her mother wait so long to tell her about him? Lina has a happy life in Seattle and doesn’t want to leave.

Shortly after she arrives at Howard’s home, Lina meets Sonya, who gives Lina a diary that belonged to Lina’s mother, the one she had kept while she was a photography student in Florence. While Lina is living her life and exploring Tuscany with her handsome neighbour, Ren, she follows in the footsteps of her mother and gets to know her as never before.

She also finds out the truth about her father. Mostly she finds out about herself.

Teenager Lina’s mother had been informed that she was dying from cancer. After bringing Lina up as a single parent, her dying wish was for her daughter to move to Tuscany, Italy, to live with her father Howard, a man Lina had never heard of, nor knew anything about.

Shortly after her mum’s death, Lina apprehensively travelled to Italy, leaving behind her grandmother, and best friend (whom she had been living with). Things didn’t exactly start off well with her father though, after it turned out that he was the caretaker of a World War cemetery, and that the house she would be living in overlooked the headstones.

But then she met sexy neighbour Ren who was half Italian, half American. The two struck up a friendship that ran deep. When Lina was presented with her mother’s old journal, the two of them settled down to read about her mum’s life in Italy, which included plenty of surprises and shocking moments.

Love and Gelato, is a YA book that is filled to the bring with emotion. Lina is a beautifully-rounded character. She is exceptionally likeable, and tries to carry on with her life as normal as she possibly can after her mum’s premature death.

At the start, Lina didn’t take to Italy. Yes the country was beautiful, but she didn’t want to move to a different place, halfway around the world, to live with a father she had never heard of, leaving her life and friends back in the States. Then there is the fact of having to see the headstone everyday, as if she needed a constant reminder of her mother’s death.

Ren is a lovely, well-mannered, rather good-looking, young man. The two take to one another and their relationship develops well as Lina isn’t afraid to say exactly what she thinks, and Ren doesn’t pussyfoot around her, treating her like a fragile doll.

You get to read all about Lina’s mum’s time when she too lived in Italy. It is written in diary form throughout the book, and you get to discover what she got up to, at the same time as Lina and Ren do, though I had already worked out from the off about the mysterious X.

The book is fantastic. I was as engrossed and eager as Lina was, to finish the journal. But it is more than just about Lina discovering about her mother’s past. It is about Lina learning to discover herself too, and to learn to move on as best she could after her mother’s death.

The story is filled with surprises, twist, turns, and poignant moments. Yes there are plenty of emotional scenes, but there are also just as many funny moments too. I’ll admit that the book might not be aimed at my age, but I held off reading the last chapter for a couple of days when I’d reached it, as I just didn’t want the book to end.

The writing is incredibly authentic, and the plot totally unique. Love and Gelato is a completely amazing book, from a superbly-talented debut author. I look forward to reading more from Ms. Jenna Evans Welch.

Jenna Evans Welch spent her high school years in Florence, Italy, where she drove a scooter, danced in fountains, and ate entirely too much gelato.

She now lives in Salt Lake City, Utah, with her husband and young son.