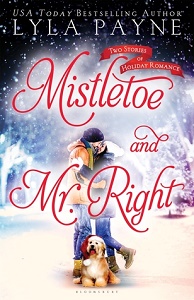 Twas the night before Christmas and all through the house, not a creature was stirring…but lust refused to settle in for a long winter’s nap. She might be all nestled, snug in her bed, by why, oh why, do visions of the wrong guy dance in her head?

Jessica, (not Jessie), figures that nothing could be better than a trip to the Emerald Isle for Christmas break. So she takes a flying leap and follows her boyfriend home for the holidays, not only sure that he will finally agree they’re destined for each other, but also that Ireland will provide the perfect backdrop to the beginning of their happily-ever-after.

But it turns out his family–and his gorgeous ex-girlfriend–don’t feel the same way, and even the family goat seems to be conspiring against her well-laid plans. The only person making the trip worthwhile is the very last one she should be thinking about, but Grady, the local farmhand, has a way of showing up when Jessica needs him most…and least.

Jessica MacFarlane has been dating Brennan Donnelly for four months. Jessica likes to have everything planned out. She has a plan for everything. But, her relationship with Brennan isn’t moving along as she thinks it should be.

Brennan is super good looking, he could have any girl on campus he wanted. He’s kind and funny. But he lives in the moment. She has no idea where this might be going. So, she makes a rash decision on Christmas vacation to fly to where Brennan lives with his family, Fanore, Ireland, and spend Christmas with him. She thinks that maybe she can show him that she is the perfect girlfriend.

Things, though, didn’t exactly go as she planned. The first being a goat standing in the middle of the road as she came around a curve. The second is the oh so handsome Grady Callaghan, the farm hand. Grady always seems to know right when Jessie needs him.

“The guy seems to have some kind of Jessie in Distress radar.”

Jessica hasn’t had a real Christmas since she was six years old so no matter how badly things are going with Brennan, she loves being a part of this picture perfect Christmas setting. Can she picture herself being a permanent part of this family?

First off, I can imagine the scenery of this Irish countryside so easily. The rolling green hills and the misty mornings and snow covered grounds. It all just makes me sigh. And I did love Jessica. I struggled a bit with her taking off like that and flying to Ireland, surprising her boyfriend and his family the way she did. But, as I got to know her and learned her story, I understand why she did it.

I didn’t care for Brennan very much. He was too flippant for lack of a better word. For me, I could tell right away he never really was invested in the relationship. He was a here and now kind of guy. There is so much he should have told Jessica. Maybe four months isn’t all that long but there are things he should have shared with her.

So, that leaves Grady. I loved Grady. He just saw Jessie, just instinctively knew what she needed. Time and time again, when it should have been Brennan, Grady was there for her. I loved the epilogue of this book. It was the perfect ending. I did enjoy this book.

I read Mistletoe and Mr. Right back in July and even though it was 95 degrees outside, it still made me feel all the Christmas warm and fuzzies. It is a short little holiday story that is sure to warm your heart as well.

Lyla Payne has been publishing New Adult romance novels for a little over a year, starting with Broken at Love and continuing with the rest of the Whitman University series. She loves telling stories, discovering the little reasons people fall in love, and uncovering hidden truths in the world around us – past and present.

In her spare time she cuddles her two dogs, pretends to enjoy exercising so that she can eat as much Chipotle as she wants, and harbors a deep and abiding hope that Zac Efron likes older women.

She loves reading, of course, along with movies, traveling, and Irish whiskey. Lyla’s hard at work, ALWAYS, and hopes to bring you more Whitman University antics and at least one more Lowcountry ghost tale before the end of the year.