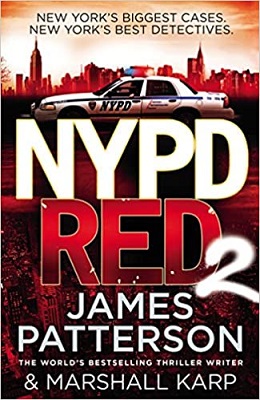 NYPD Red 2
I received a free copy of this book.
This post contains affiliate links.

NYPD Red – the task force attacking the most extreme crimes in America’s most extreme city – hunts a killer who is on an impossible mission.

A vigilante serial killer is on the loose in New York City, tracking down and murdering people whose crimes have not been punished. The number of victims grows, and many New Yorkers secretly applaud the idea of justice won at any price.

NYPD Red Detective Zach Jordan and his partner Kylie MacDonald are put on the case when a woman of vast wealth and even greater connections disappears. Zach and Kylie have to find what’s really behind this murderer’s rampage while political and personal secrets of the highest order hang in the balance. But Kylie has been acting strange recently – and Zach knows whatever she’s hiding could threaten the biggest case of their careers.

Detectives Jordan and Macdonald from Red division, New York, are back in the second book of a current six-book series from authors James Patterson & Marshall Karp.

This time the detectives are on the hunt for vigilantes who are targeting people who seemingly have gotten away with murder. They are torturing them, videoing their confessions, and then leaving them to be found by the public wearing hazmat suits – hence they are known as the hazmat serial killers.

Four people have already been murdered when the Red team gets involved after the murder of a high profiled woman with a powerful and wealthy family.

But the team has their work cut out as they race to bring the killers to justice before the local mayoral elections as ordered by the current mayor.

It was exciting to be back with the NYPD Red team Jordan and MacDonald as they are put onto the serial killer case. Their suspicion soon leads them on a path they were unexpecting and we are fed a few red herrings along the way.

I love the camaraderie between the two lead detectives though their banter wasn’t as full-on as in book one, especially as MacDonald’s mind was somewhere else with a personal issue for most of the book.

I love the cross-over of plots, one from many years ago when the killers were just teenagers and the consequences their actions back then now have on their lives in the present.

If you love full-on thrillers that keep you guessing then this is a series to pick up. Now I’m onto book three.