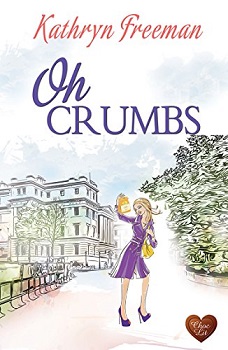 Abby Spencer knows she can come across as an airhead – she talks too much and is a bit of a klutz – but there’s more to her than that. Though she sacrificed her career to help raise her sisters, a job interview at biscuit company Crumbs could finally be her chance to shine. That’s until she hurries in late wearing a shirt covered in rusk crumbs, courtesy of her baby nephew, and trips over her handbag.

Managing director Douglas Faulkner isn’t sure what to make of Abby Spencer with her Bambi eyes, tousled hair and ability to say more in the half-hour interview than he manages in a day. All he knows is she’s a breath of fresh air and could bring a new lease of life to the stale corporate world of Crumbs. To his life too, if he’d let her.

But Doug’s harbouring a secret. He’s not the man she thinks he is.

The book begins with a thirteen-year-old Abigail (Abby) Spencer attending the funeral of her mum and running around after her little sisters.

We then move forward in time six years and Abby is the mother figure of the house. Her dad works long hours so it’s up to her to look after her four little sisters. From taking them to school, feeding, cooking, etc. She is the proper mother figure. She decides not to go to university as her family needs her at home, opting for a secretarial job instead.

Once again the book jumps forward in time another six years. Now in her twenties Abby has completed a degree online and is off to an interview for a job as the Personal Assistant to the CEO of biscuit factory, Crumbs.

Arriving slightly late, with rusk down her shirt (thanks to her baby Nephew) and the inability to stop talking, Abby thinks she has blown the opportunity. However, CEO Doug Faulkner sees something in her and offers her the job right away.

The company is trying to sell three of its biscuits that aren’t selling well to a rival firm, but Abby thinks that there could be a better solution. Plus, there is also the issue that Abby seems to be falling for her boss and at one point she thought he felt the same too. But this is a man that is hot one minute and cold the next. A man hiding something from everyone, even himself.

Oh Crumbs was a delightful read with an amusing, yet poignant plot and fantastic characters.

Abby is worth her weight in gold both at home where she has nearly enough single-handedly raised and looked after her younger sisters since the death of their mother and at work where her ideas and work ethics are second to none.

Doug is one of those characters that you like one minute and want to scream at the next. He’s a very mixed up young man. He’s been thrust into the family business by his father who he doesn’t see eye to eye with, nor have much respect for. He’s hoarding a secret that he doesn’t want anyone to know about, which means he pushes people away from him. Including Abby who he clearly adores.

Kathryn Freeman’s writing is superb and she takes tough situations, such as the funeral scene, and manages to add some light-hearted humour to them that really works.

I was captivated by the story from the very beginning and the plot held my attention for the duration. A real heart squeeze book that was pure joy to read and one I enjoyed immensely.

A former pharmacist, I’m now a medical writer who also writes romance. Some days a racing heart is a medical condition, others it’s the reaction to a hunky hero.

With two teenage boys and a husband who asks every Valentine’s Day whether he has to buy a card (yes, he does), any romance is all in my head. Then again, his unstinting support of my career change proves love isn’t always about hearts and flowers – and heroes come in many disguises.