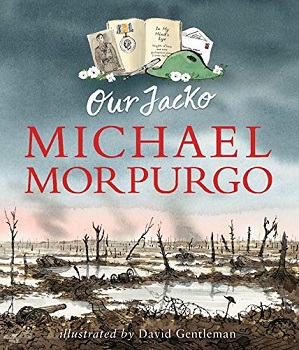 Our Jacko by – Book Review

“This war is a nightmare that one day I shall wake from and then forget. And if I don’t wake, then you shall never know. I don’t want you ever to know.”

No one seems to know where the scruffy tin hat came from – just that it is very old, from some war or other long ago. To young Michael and his family it has its uses today: as a child’s toy, a feeding bowl for the hens, a hanging basket… Then Michael discovers that it belonged to his great-great-grandfather, “Our Jacko”, who lost his life at Ypres in 1915.

As the boy digs deeper, he finds the young soldier’s diary and learns more about his forgotten ancestor – husband, father, poet, actor – who died so tragically young. And it becomes clear exactly how Our Jacko should be commemorated.

Brothers Michael and Otto are very different indeed. Otto, the older of the two understands all about war and how and why it happens. Michael is a complete pacifist and believes that war is never the answer and only wants peace.

As they were growing up a tin hat with a bullet hole in the front was Otto’s favourite item, he wore it everywhere. Michael despised the hat and even when it became a holder for chicken feed and then a flower basket, he still didn’t like what it represented.

One day Michael’s class start learning about the war and a trip to Ypres, Belgium is planned. The class are asked to find out if they had any ancestors who fought in the war, that’s when the boys discover that the hat belonged to their Great-Great Grandfather Lieutenant Jack Morris (Jacko) who lost his life in battle in 1915 in Ypres. They also discover an old suitcase of Jacko’s things too, including his little notebook filled with letters and poems.

Our Jacko is a beautiful, poignant book. Although this is a children’s book, I got quite emotional reading it and believe me I rarely get emotional when reading a book but this one really hit me. The story is just stunning and the illustrations complement Sir Michael Morpurgo’s words perfectly. The book is a mixture of story, poems and letters written home and with this year being the centenary of World War One, I feel that this makes the book even more powerful.

The brothers are both lovely children and it was nice to see them age through the book and for Michael who still believes in peace as he ages to also want to find out about his relative and try to understand what happened during the war and learn that it is a valuable part of history that you can’t just block out.

It is a book that makes you stop and think about what the people who lived through the Two World Wars went through and about those who fought in them and the families they left behind. It is a very heart-felt book and one I believe all children (and adults) should read, to learn about that period in history through Jacko’s personal story.