Sha’Kert: End of Night by Ishmael A. Soledad – Book Review

Sha’Kert: End of Night by Ishmael A. Soledad – Book Review 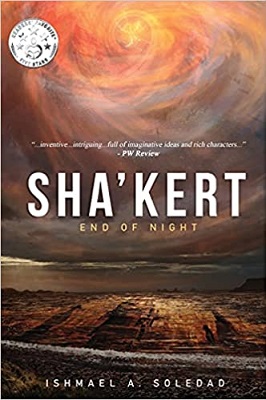 A Heartfelt and Mesmerizing Sci-Fi Drama.

Greg and Lou learn that their daughter has a terminal illness. In their desperation, they make a deal from which there is no return. When their crimes are exposed, their world is turned upside down.

Henry wants nothing more than to leave his Amish community behind, even as their land is under threat; their traditions under fire; and their faith faces its greatest test. But his mother is his world – where she goes, so too will he.

Circumstances bring these two worlds together – a family banished to the edge of the galaxy; a community praying for a new life and the re-orientation of their destiny. But when fate abandons them to an uncharted, inhospitable planet, some struggle for survival while others embrace the opportunity to explore this strange new world. Relationships are tested, beliefs are tried and emotions are pushed to the limit.

Yet Sha’Kert has a place for all.

A slow burn but fascinating story about making a life where you find yourself, Sha’Kert: End of Night is a contemplative speculative science fiction.

The story follows Greg and Louise, exiled from Earth after engaging in criminal activities to pay for life-saving treatment for their terminally ill daughter. They are ordered to accept a permanent posting on the same backwater planet as a group of Amish settlers, who intend on creating a new community for themselves free of encroaching technology. (Trigger concerns: the plot surrounding the child’s illness is not a large part of the story and contains no scenes of a child in distress)

Part new world cultivation and part first contact, Sha’Kert is a slow-paced and methodical story but in a contemplative way, not a tedious one. I was drawn into the characters’ journey and the planet upon which they settle.

The three main characters were not entirely likeable but were realistic. No one acts hyperbolically or out of character. Greg is a bit pompous, but his story is the most relatable of the bunch (at least for me). I wish we’d gotten some flashbacks about their lives growing up in the futuristic society as we only learn a small amount about their pasts and I could have used more detail on the world itself before they left it.

The novel also features an interesting collection of side characters for a sci-fi novel: the Amish. I don’t profess to be an expert on the religion or culture, but there are Mennonite communities in my region, and I’m related to those of the “modern” denomination, so I found the aspects of their society to be realistic and accurate. They are neither lauded for their steadfastness towards being Luddite nor are they vilified for it.

While not an action-packed novel, there is a lot to keep you interested and reading. Small mysteries abound and those who enjoy new planet colonization will very much enjoy this story.

Unfortunately, the last twenty percent of the novel dropped off considerably for me. I wasn’t sure what the overall theme or intention was with the final chapters, but up to that point the novel was an entrancing exploration into how humans interact with technology and how far they’ll go to preserve their culture.

G’day, I’m Ishmael, and I hail from Brisbane on the east coast of Australia with my wife of thirty-six years. I started writing science fiction because I’ve read and watched it since before I went to school, and I thought it was time to give back instead of just taking.

My short stories and flash fiction have appeared over the years in Aphelion, Antipodean SF, Far Cry Magazine, Planet Web Zine, Schlock! Webzine, and Quantum Muse among others, and are compiled in my two short story collections ‘Hawking Radiation’ and ‘Sex and the Single Cosmonaut’.