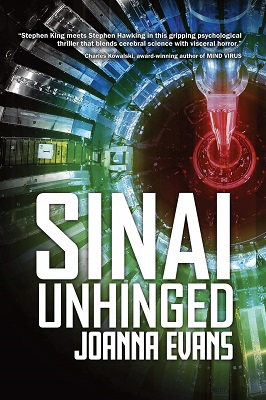 Lethal mistakes during a secret experiment drive scientists insane and plunge their therapist into a frightening search for the truth—and a dangerous fight for her life.

As the cries of a volatile patient in the psychiatric ward of Sinai General haunt therapist Alexandra Kraig, she realizes something terrifying has happened at the Complex. Mistakes have occurred there, mistakes that have changed him. When Alex’s closest friend, also a scientist at the Complex, develops deeply disturbing behavior, she becomes determined to uncover the truth about the particle physics experiment hidden deep within the Complex walls, a project her missing father warned against many years before.

With her friend on the brink of madness, Alex resurrects her father’s research, infiltrates the Complex and races to halt the experiment’s destructive force. A dark element has another plan, hijacking the system, intensifying an already looming catastrophe, and propelling the Complex toward implosion. Battling the enemy and the machine, Alex faces a ticking clock as she struggles to find the answer buried somewhere in her father’s secrets; an answer she desperately needs if she is to save her own life, and the lives of thousands more.

Therapist Alexandra Kraig (Alex) works in the psychiatric ward of Sinai General. The book begins with her dealing with a patient called Austin who has recently been brought in. Up until he had a huge mental health breakdown in which he began hallucinated and became violent he had no knows issues with his health. He was a bright young man working as a scientist on a secret experiment at ‘The Complex’, however, he isn’t the first patient to be admitted from the same department.

When a close friend of hers takes over Austin’s job at The Complex it isn’t long until he starts having manic episodes. Alex knows something is happening at The Complex and the research the scientists are doing is causing them to lose their minds. Alex decides she needs to find a way into the research programme and stop whatever it is the scientists are working on. Armed with her scientist father’s research she has to act quickly if she is to save herself and others.

Sinai Unhinged is a sci-fi thriller set between a psychiatric hospital and a scientific research complex. The book is action-packed and if you like your sci-fi books filled with scientific jargon, you will love it. Particularly if you love particle or quantum physics.

I’m not the most scientific person and some of what was happening went over my head but from what I could work out is that the scientists who were losing their minds were all working on the same project, one that was using a particle collider to extract subatomic particles. There is something wrong with the destabiliser the scientists are using, they report hearing a crack and feeling like something had entered them. Before they started displaying signs of madness. I hope I got that right.

The book wasn’t an easy read and I found that I had to research a lot of what was happening and look up words along the way, not something I like having to do whilst reading as it makes reading the book a challenge rather than an enjoyment.

At times it felt like parts of the book were overly long and filled with sections that just didn’t add any depth to the story, at others I felt like we rushed through parts.

The book had a dark, raw feel to it, as well as it being a unique read. There is a kind of evilness surrounding the story, is it something from beyond our world which is driving the scientists insane? Could this same energy infiltrate outside of the complex?

With an air of mystery, especially about Alex’s past and her father the book did have some twisty moments and moments that had you guessing. However, for me, the book was a little too out there and scientific and so I couldn’t enjoy it as much as I would have liked to.

Growing up in Michigan, Joanna was an avid reader at a young age. Her wild imagination led her sixth grade teacher to encourage her to become a writer. Instead, she aspired to be like Dr. Joyce Brothers. Upon completing her Master’s in Social Work from the University of Michigan, she moved to North Carolina and led a successful career as a psychotherapist for adults and children, with specific expertise in trauma treatment. But, her love for books and writing never left her.

Inspired by Stephen Hawking’s A BRIEF HISTORY OF TIME, Gary Zukav’s THE DANCING WU LI MASTERS, and any ancient spiritual or religious text she could find, she became fascinated with particle physics, the purpose of life and the need for a story that illustrated how intertwined we all really are. Eventually, her craving for an action-adventure set inside a place like CERN led to the creation of Sinai Unhinged.